Unemployment - A price worth paying for lower inflation?

"Rising unemployment and the recession have been the price that we have had to pay to get inflation down. That price is well worth paying."" 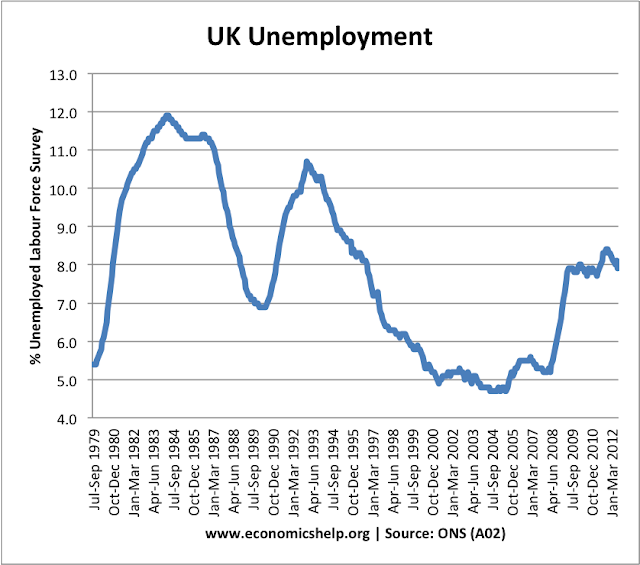 Unemployment started increasing in 1990 and rose to over 3 million in 1993. 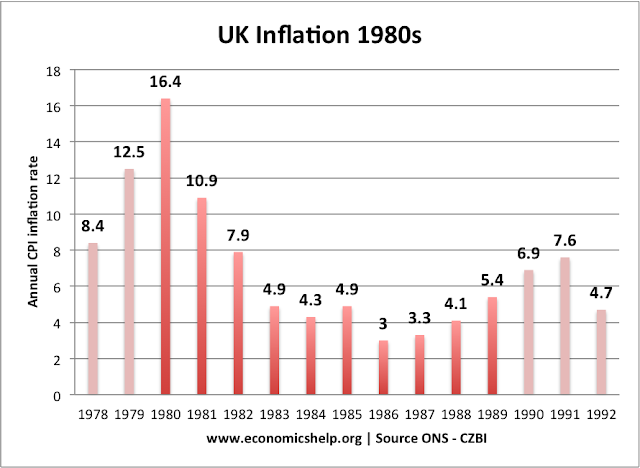 John Major also said "If it's not hurting, it's not working"

Unemployment vs Inflation is a trade off that policy makers often face. But, this particular statement was widely seen as a political gaffe or just a callous disregard for the costs of unemployment. To make such a bold statement is to suggest the government cares little for the personal cost of those who are made unemployed, but is it justified? and is there any economic rationale behind this?

What is the justification for making this statement?

1. The unemployment will only be temporary and a necessary step to overcome the inflationary pressures in the economy.

It is argued that inflation leads to lower living standards in the long run. High inflation creates uncertainty and confusion about future prices and costs. This tends to reduce business investment and leads to slower growth. High inflation also creates menu costs for the economy and more importantly will contribute to deteriorating competitiveness in the economy. Unless inflation is reduced the economy will always grow at a slower rate than it could with low and stable inflation.

It is widely accepted that previous inflation rates have a strong bearing on future inflation. If an economy experiences high inflation, people expect high inflation in the future. This becomes self fulfilling as workers demand higher wages and firms push up costs. If inflation is reduced then it becomes much easier to keep it low in the future.

Problems of the statement


1. Unemployment can last for a long time

When the Conservative party came to power in 1979, inflation was over 20% the government implemented high interest rates and tight fiscal policy in an attempt to control the money supply and inflation. They were successful in reducing inflation but at the cost of a deep recession. Unemployment rose to 3 million and high rates of unemployment persisted until the late 1980s. Arguably the social costs of unemployment are far greater than inflation. If there are lower levels of investment it is not as damaging and dispiriting as having no work. The fact that the early 1980s saw many riots in the inner cities show the social problems which unemployment can create.

If your only target is low inflation then the danger is that the monetary authorities will become blind to other economic issues. It is my belief that the 1981 recession was deeper than necessary. The enthusiasm to reduce inflation was overdone; if they had given greater importance to unemployment they would not have persisted with anti inflationary policies for so long. Similarly the 1991 recession was deeper than necessary because of the insistence of remaining in Exchange Rate Mechanism for so long. True, low inflation is important but to target at the exclusion of all else misses the whole point.

One irony of the statement was that the inflation was largely avoidable. The economy was allowed to expand far too quickly in the late 1980s leading to the boom and inflation. If the economic cycle had been better stabilised the government wouldn't have been left with the difficult dilemma.

The danger of targeting only inflation becomes more apparent in a period of stagflation. This means both inflation and unemployment rise due to the Aggregate Supply shifting to the left. In this case, keeping to a low inflation target risks causing a widespread downturn in the economy. In periods of stagflation flexibility may be required in inflation targets, even if this risks reducing confidence in inflation policy.

Posted by Tejvan Pettinger at 10:59 AM

Seeing as this page is being quoted elsewhere, the exact quote is :

"Rising unemployment and the recession have been the price that we have had to pay to get inflation down. That price is well worth paying."