Boom and Bust in US Housing Market.


Between 2006 and 2012, the US housing market saw significant falls in house prices, combined with record levels of mortgage defaults. Many economists and housing experts have suggested it is a bust that was inevitable to occur. This short article looks at why the US Housing Market went from boom to bust. 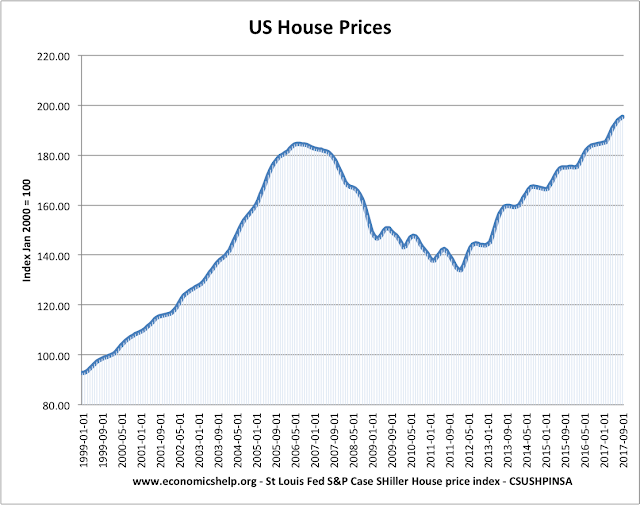 The effect of rising house prices was that it was increasingly difficult for first time buyers and those on low incomes to buy a house. It also means that those with mortgages pay a higher % of their income in mortgage payments. This means they are more vulnerable to any changes in the housing market.
Ratio of House prices to Incomes in US


Ratio of House Prices to Rent

Usually when house prices rise, demand moderates. However, in the case of the US housing market, mortgage lenders were desperate to maintain sales. Therefore they just found new ways to sell the more expensive houses.
In particular mortgage lenders did several things to maintain sales amongst those with poor credit, low income and higher risk see example of inappropriate selling of mortgages (3)

Basically, this means for the first year or two the homeowner gets an introductory interest rate, making mortgage payments cheaper and more affordable. However, after 2 years the interest rates jumped to the standard variable rate. Unfortunately because of the way mortgages were sold, these facts were not always made clear; meaning many households on low incomes took out mortgages they would later struggle to pay. This will become an increasing problem throughout 2007 as more mortgages end their introductory period.

4. Increased use of Variable Adjustable Mortgages.

In 2002 interest rates were very low (1%) This made adjustable mortgages very attractive. Therefore more people could afford to get a mortgage. However, interest rates have since risen considerably since their historical low, significantly increasing the cost of mortgage payments. The rise in Adjustable mortgages is most prominent amongst low-income families. Fixed rate mortgages would have been safer, but mortgage companies have not been pushing these since they tend to look for best short-term chance of selling a mortgage. (The growth in ARMs between 200 0and 2004 accounted for about two-thirds of the relative increase in variable interest debt.) (4) 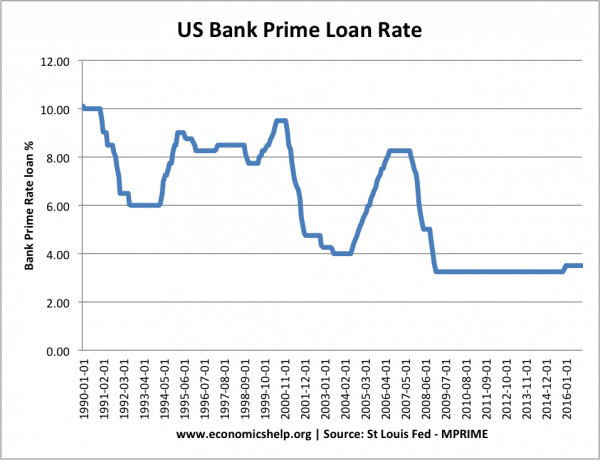 In 2002 because of weakness in other areas of the economy monetary policy was loosened. This was perhaps a good strategy regarding economic growth and inflation, however, it ignored the micro implications for the housing market. Low-interest rates were a real stimulus for those on low income and bad credit records to buy a house for the first time. However, between 2003 and 2006, interest rates were increased - significantly raising the cost of mortgage payments for homeowners. Just a 2% rise in interest rates can increase the cost of mortgage interest payments by 40% (5) 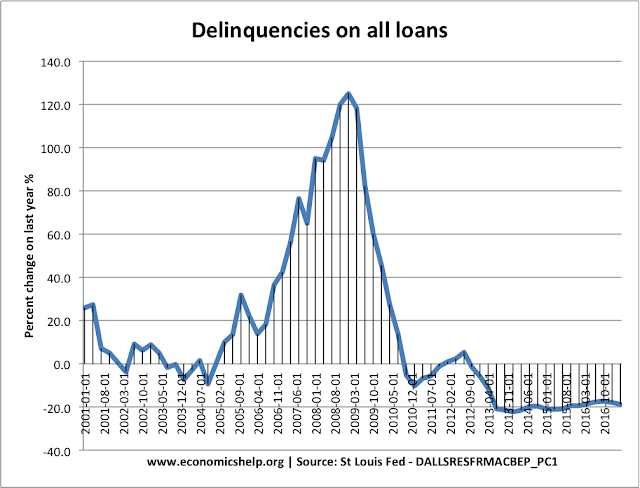 Rising house prices did encourage an element of speculation in the US Housing Market. Estimates suggest 25% of house purchases in 2005 were influenced by speculation (5) The Housing market was providing greater returns than the stock market, therefore this encourages buy to let investors. As house prices start to fall this section of the market changes completely.

The boom years encouraged an excess of new houses being built. The supply of housing now exceeds the demand, therefore the price of housing is likely to continue to fall (6)

(6) Excess Supply in US Housing Market


Related links on US Housing Market
Next blog post: Effect of Falling House Prices on the Economy. Will it cause Recession?
Posted by Tejvan Pettinger at 10:29 PM

Email ThisBlogThis!Share to TwitterShare to FacebookShare to Pinterest
Labels: US economy, US housing Market