The end of the 1950s was a period of rising living standards, summed up by Harold MacMillan's 'you've never had it so good'

Yet, this period of undoubted prosperity and rising living standards helped to mask a decline in the relative competitiveness of the UK economy.

Rising living standards of the 1960s 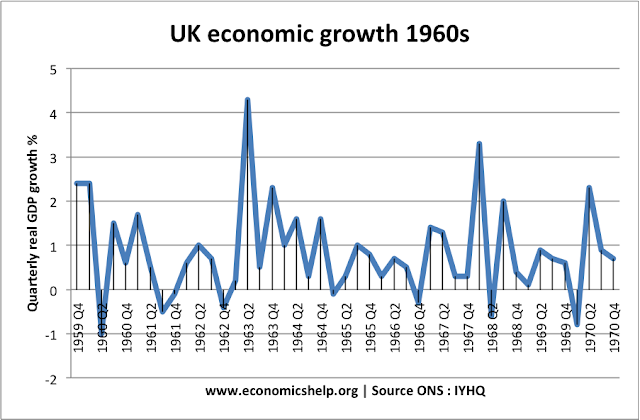 UK economic growth in the 1960s. There were brief dips in output, but these were not sustained.

In the 1960s, economic growth translated into rising living standards, with households able to purchase a greater range of 'white goods' and cars. There were new markets emerging, for example, teenagers had greater disposable income to spend on pop music, like the Beatles. 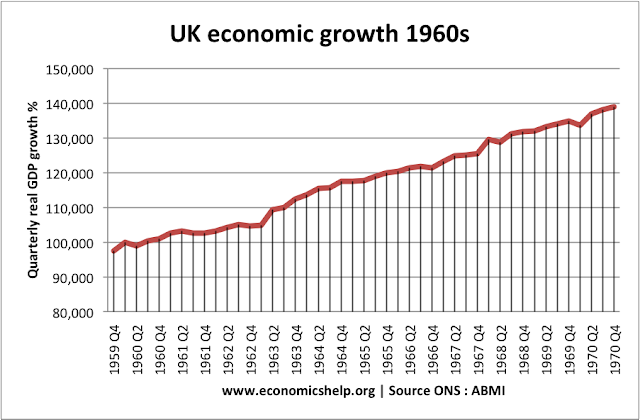 There was also a revolution in transport. At the start of the 1960s a majority of households did not have a private car, but relied on public transport. By the end of the 1960s, car ownership rates had risen from approx. 40% to 60% (RAC - car ownership rates) The first motorway was built in 1958, and throughout the 1960s there was a major road building programme - just as the railway network was severely cut back.

Compared to current prices, housing was also still cheap. Helped by a boom in post-war house building, owning a home was an affordable aspiration for both the middle class and working class. (Average house prices in 1969, £4,328). During the 1960s, home ownership rates increased.

However, despite higher economic growth, the UK performed relatively poorly compared to our major competitors, such as Germany, Japan and US roared ahead UK productivity growth was relatively lower due to several factors. such as:
Balance of Payments 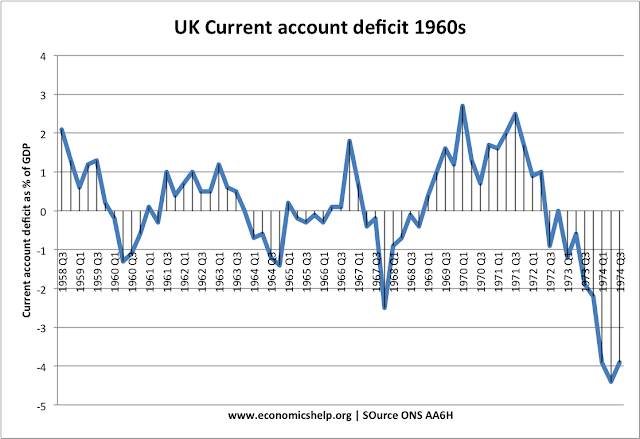 In the 1960s, the trade deficit was seen as a vitally important economic statistic, with important politically considerations. Unfortunately, for the Harold Wilson government of the 1960s, the UK trade deficit was embarrassingly large - a result of the decline in competitiveness and a wish to retain a strong pound. Campaigns like 'Buy British' were surprisingly prominent, but, ultimately failed to make any real dent in the trade deficit. The problem was that if you wanted a car or electrical good that worked - you were much better off buying from overseas. If we made jokes about Skodas and Ladas in the 1980s, British Leyland was the butt of many jokes during 60s and 70s.


Despite the economic weaknesses of the 1960s, it was still an era of full employment and rising real wages. Compared to the rest of the Twentieth Century, the 1950s and 60s were a rare period of full employment. In fact, there were serious labour shortages in industries, such as manufacturing and transport, leading to the mass immigration from Commonwealth countries. 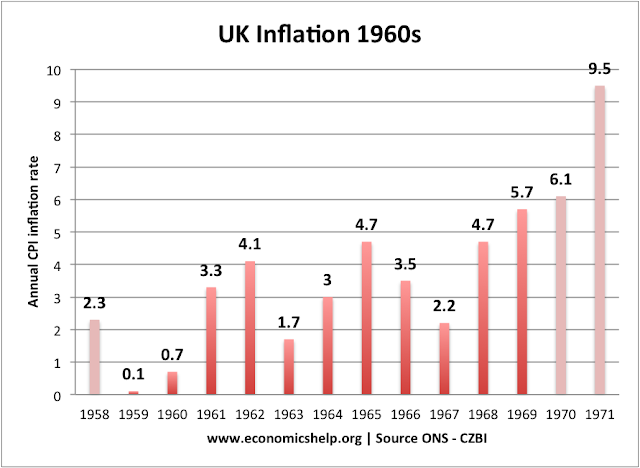 Throughout the 1960s, the government were committed to keeping the value of the Pound high. This led to relative high interest rates and intervention in foreign currency reserves. However, efforts to keep the Pound strong, ultimately failed, and in 19 Nov, 1967, the government were forced to devalue the Pound. The Pound was reduced from $2.80, to $2.40, a cut of 14%. It was considered a political embarrassment, though it was necessary given the declining competitiveness. Harold Wilson made a major announcement telling people:


"It does not mean that the pound here in Britain, in your pocket or purse or in your bank, has been devalued." (BBC)

But, it did cause the price of imports to rise and contribute to rising inflation. It was also hoped the devaluation would tackle


"Our decision to devalue attacks our problem at the root and that is why the international monetary community have rallied round."

However, although it proved a temporary boost in competitiveness. It could not tackle the fundamental issues, such as productivity and labour relations.

The experience did seem to sum up the 1960s. - not bad - but, could have done better - and we certainly weren't as good as everyone else.

See more on Devaluation of 1967


After the Second World War, the UK was left with huge debts. National debt as a % of GDP exceeded 200% of GDP in the early 1950s. Britain was reliant on loans from the United States. Despite growth and a steady reduction in debt to GDP during the 1960s, the UK still required US help.

Undoubtedly, had it not been for the necessity of borrowing from the US, Harold Wilson would have been freer to be more critical of the Vietnam War - as he told his cabinet on why he would not criticise the war - 'You can't afford to kick your main creditor in the balls' - or words to that effect.

But, if the late 1960s were difficult, the 1970s proved to be one of the most difficult economic decades since the 1930s. It was an era of industrial confrontation, rampant inflation, an unexpected oil shock and an unwelcome return of mass unemployment. The economic power of the UK was exposed for what it had become.... ( - UK economy in 1970s )

Posted by Tejvan Pettinger at 3:00 AM

Some stuff on Trump's economic plans would be good too!