After the first European recession in 2009, the EU is heading back into another recession only three years later. But, this recession is much more worrying. There is less room for maneouvre, attempts to solve the debt crisis have failed, and have left countries with both low growth, but continuing debt problems. 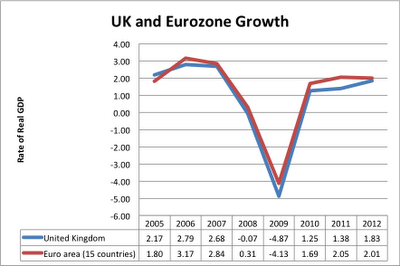 The cause of the second recession is depressingly simple.

Since Greece increased taxes, and cut spending, VAT receipts have fallen 18% in 201. Simply because 60,000 firms went out of business. This is an example of how austerity policies can be self-defeating in a recession. (Tragedy of Greece)

Yet, Daniel Mitchell, of the libertarian-minded Cato Institute, argues that Europe has not been austere enough and that much more is needed. "European countries talk about austerity but they don't mean cuts," he says. (Guardian Link). At least the IMF are aware that there can be too much of a necessary thing. (IMF blog)

Youth unemployment of 50% - just cut government spending a bit more. This is the logical policy of free market economics.

Yet, despite all the austerity of Greece, Italy and Ireland, they have failed to solve the 'debt crisis'

Depressed with the European economy, I had a look at the Indian economy in 2012 - at quite a different stage of the economic cycle. What India needs is to reduce its budget deficit and liberalise its complex bureaucracy. If India can lears anything from Europe - don't wait for an economic downturn to try and solve persistent budget deficits.

Keynesian economics may support fiscal expansion during a recession, but in India's case, a very different approach is needed.

Posted by Tejvan Pettinger at 9:38 AM