A look at some of the challenges facing the Eurozone and why the Euro is likely to remain weak over coming months.

The Euro has been weak ever since the debt crisis began at the start of 2010.
Challenges for the Euro 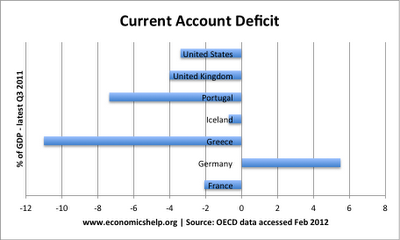 The single currency has created economic imbalances in the Eurozone.

Growth forecasts for the Eurozone have been downgraded. For southern Europe, there will be a double dip recession, making it harder to reduce debt to GDP ratios and increasing unemployment. Unfortunately, it is hard to see a strategy for growth. There will be no loosening of monetary policy. The exchange rate will remain overvalued for the uncompetitive south. And at the same time, they have to reduce spending to tackle budget deficits. Combined with a European wide slowdown, it will be a slow and limited recovery.

Related
Posted by Tejvan Pettinger at 9:44 AM