Definition of Boom and Bust: A period of rapid economic expansion which is unsustainable leading to subsequent period of economic contraction and recession. 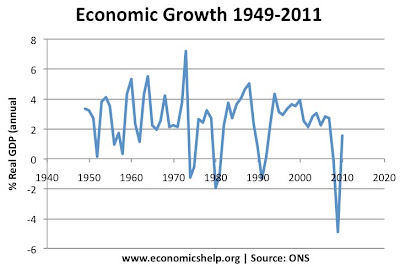 Was the great moderation a period of boom and bust?


Inflation stayed low between 1992 and 2009. It wasn't a classic boom. Economic growth was positive, but it wasn't significantly higher than the long run trend rate. Inflation stayed low.
However, although growth and inflation were stable in the 1990s and 2000s, there were still components of a boom and bust.

In the late 1990s and early 2000s, there was a housing boom and bust. UK House prices rose much faster than inflation until Summer 2007, when the credit crunch completely changed the nature of the mortgage market. As mortgages were withdrawn, house prices started to fall. But, because mortgage affordability was stretched, people were not able to save the new size of deposits. Because prices had risen so much they had a long way to fall. The fall in house prices has played a crucial role in knocking consumer spending and consumer confidence. It has directly led to job losses in construction and estate agents.

The boom and bust in housing is quite clear and has played a key role in the current bust.

Unbalanced Economy A boom and bust suggests an unbalanced economy. In the growth years of 2000-08, there was a strong growth in consumer spending and consumer borrowing. This is reflected in the:
In other words, the main cause of UK economic growth was consumer spending. The economic growth was not balanced throughout different sectors. Because saving rates are so low, it means that the UK is particularly sensitive to the rising living costs and tighter credit conditions.

In the late 1980s economic growth increased to 5% a year in 1988 and 1989. This was far above the long run trend rate and this excessive growth caused inflation to rise to double figures. In response to the inflationary spiral, the government joined the ERM and increased interest rates. This reduced inflation, but, at the expense of switching the boom into a painful bust. House prices collapsed (not because of a financial crisis, but because interest rates were so high). Unemployment rose and the government dithered in stimulating the economy because it was pursuing an outdated target for sterling against the D-Mark. See Lawson boom
Implications of Boom and Bust.

The UK did have its longest period of economic expansion on record - 1992-2008. In part this was due to avoiding a boom and bust cycles which have been frequent in the post-war period. However, you could say there was a boom and bust cycle in financial markets. Lending rose rapidly, but this later proved unsustainable.

This recent crisis, raises the importance of looking beyond headline inflation and economic growth statistics. Low inflation is not the only factor we need to look at. It is a mistake to ignore house prices bank lending and other indicators of economic / financial volatility.
There is also a danger of relying on consumer spending to fuel growth.
There is also a danger of attracting hot money flows to finance a current account deficit. And there is a danger of allowing lending criteria to become so relaxed that any tightening creates economic problems.

Posted by Tejvan Pettinger at 9:08 AM

Can anyone explain to me the principle of sustainable economic growth on a planet with finite resources?

I guess it is not a good career move for an economist to admit a limit to growth.

Thank you. I look forward to it.

I think what Milton Friedman would say that since the scarcity of resources will eventually present itself, capitalism's inevitable march towards finding more economic efficiencies through developing technology and such, will either find a different set of resources to make the same product or discard the old one and create a new one...