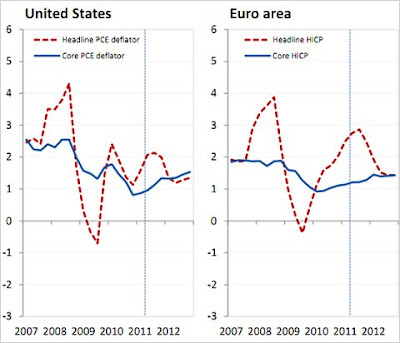 Readers Question Tonight on NBC news the headliner was more bad economic news. If the economy is so bad, why didn't I get a pay raise in my military retirement or social security this year...i.e., shouldn't the CPI go up if gas prices, etc. are increasing? Thanks.

There are many problems with the US economy at the moment. One issue is the divergence between headline inflation and 'core' inflation.

What this means is that some goods are increasing in price more rapidly than others. Gas (petrol) prices are increasing rapidly, but overall CPI inflation is more muted.

Unfortunately, it means that if your pension is linked to inflation, you may feel you are experiencing a decline in living standards because the price of goods you frequently buy are rising faster than the official inflation rate, which is used to decide pension increases.

In the UK, there is a similar situation. Many people are facing a fall in real wages because headline inflation is growing faster than nominal incomes.

It is an unwelcome combination of higher prices, lower growth and a decline in living standards.

Some suggest we should actively target lower inflation through higher interest rates and deflationary fiscal policy. However, others argue this would be an over-reaction. The biggest problem is not a temporary rise in headline inflation, but persistently high unemployment and a stagnating economy.

With rising oil prices you usually have to accept a worse trade off - i.e. higher inflation and / or lower growth. To some extent it is a question of waiting for volatile prices to stop rising.

Should Government Cut Taxes on Petrol (Gas) to Compensate for Rising Prices?

If government did cut taxes on petrol it would have to increases taxes elsewhere. It would merely shift the tax burden rather than make people better off.

However, you could argue higher gas prices do have some external benefits.

Posted by Tejvan Pettinger at 10:28 AM

Thankyou for another excellent blog entry, I thoroughly enjoy reading your work.

I was hoping you could help me with a question: Given that inflation seems to be dominated by energy (oil, gas etc.) imports, what are the factors that make the price so volatile? Also, when the prices do go up, do the economies that rely on exporting energy do particularly well? (A potential benefit if they are developing countries).