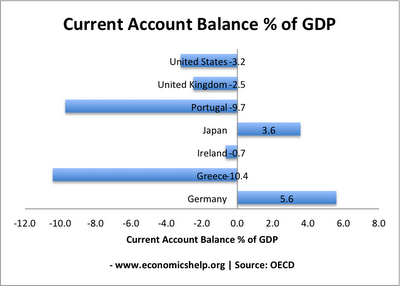 Both Portugal and Greece have a current account deficit of near 10% of GDP - amongst the highest in the developed world.
If the UK was in the Euro, we would almost certainly be facing a larger current account deficit.
Since the credit crunch hit the UK, the value of sterling has fallen 20%. To some extent demand for UK exports seem quite inelastic (the fall in price hasn't seen a big increase in demand. see: terms of trade in UK) But, if we had been in the stronger Euro, our exports would be less competitive and imports more attractive.

The Euro isn't the only reason for a Current Account Deficit. Other reasons include
Netherlanders an overvalued exchange rate exacerbates these fundamental factors causing a current account deficit.

How Else To Reduce Current Account Deficit in the Euro?

The problem facing Portugal, Greece and to a lesser extent Spain is how do they restore competitiveness when they can't rely on depreciation in the exchange rate? They need to rely on:
Supply side policies may help in the long term, but in the short term, restoring competitiveness requires a painful period of deflation to slowly improve competitiveness. Of course, this leads to higher unemployment, slower growth and the protests we are seeing in Greece and Spain.

Spain has an unemployment rate of 21%, which is almost 45% amongst young workers. This shows that there number one priority should be tackling unemployment, yet the constraints of their current economic situation mean they are pursuing deflationary policies, when really the economy needs the opposite.

In a recent post, we looked at how members of the Eurozone were more likely to experience rising bond yields. See: Problem of Euro in Recession

Posted by Tejvan Pettinger at 12:53 PM

The euro is not the sole cause of the current account deficit. Other reasons are the large budget deficits in Greece and Portugal.