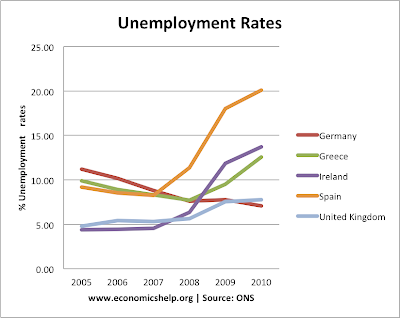 The developed world is facing a real and pressing problem - unemployment. But, it seems curiously disinterested in solving it.

In Spain, the unemployment is reaching levels not seen since the Great Depression. Spanish Youth unemployment is approaching 45%. It is unsurprising that this has finally sparked protests.
US unemployment has fallen marginally this year, but at 8.7% job creation is still low on the agenda.

Unemployment is usually caused by a combination of both demand side and supply side. Since 2007, we can see a sharp increase in unemployment, this is a consequence of the great recession and sluggish recovery. It is important to bear in mind that a significant cause of current unemployment is a deficiency of aggregate demand. In this case reducing unemployment benefits and other supply side solutions will not work. The fundamental problem is a lack of AD and economic growth.

In addition to the lack of aggregate demand there is also a problem of structural unemployment. This is due to factors such as:
See: Causes of unemployment for more details

Are We doing enough about Unemployment?

The problem is that the high level of unemployment is often put far below other economic concerns such as inflation, levels of government borrowing and maintaining exchange rates.

For example, the ECB have responded to temporary inflation by threatening to raise interest rates. The EU periphery is experiencing recession, but there is no plan to tackle the lack of aggregate demand in Greece, Ireland and Spain. To some extent this is a consequence of a single currency and monetary union. (see: problems of Euro)

In the US, the focus is on reducing budget deficit without concentrating on creation of jobs. In the UK, recent austerity measures have threatened to snub out the fragile recovery meaning the unemployment rate could continue to rise.

Europe has a two fold problem. An underlying structural rate of unemployment that occurred even before recession, but also a deficiency of demand stemming from the pursuit of austerity (problem of deficit reduction)
Unemployment in US

Trade off between inflation and unemployment
Posted by Tejvan Pettinger at 7:59 AM

I think a civilised soceity should ensure that there is work available for all.

We require a productive employment scheme to ensure that work is available. There is lots of productive employment that the private sector will never supply. For instance, a government funded scheme might provide for the many beautiful churches in our country to be kept open during the day, open to visitors. This would encourage local tourism and provide a cultural resource for people in the community generally.

2. Promoting tourism to the UK over the internet.