I was watching the very good TV programme about the 1970s. 1973-74 was one of the most turbulent years in British economic history - a boom and bust, rapid inflation, strikes, a 3 day week, petrol rationing - even the first experiments with credit cards, leading to our first credit binge and later bust. There were few things the 1970s didn't have. (Economy of the 1970s)

In some ways, things aren't as bad as the 1970s. Inflation of 3.5% is not comparable to the inflation of 20%. The current threat of a petrol blockade is pretty insignificant compared to the actual reality of a three day week. TV off at 10.30pm. Life was very different.

But, at least, the 1970s didn't have such a persistent recession and mass unemployment. 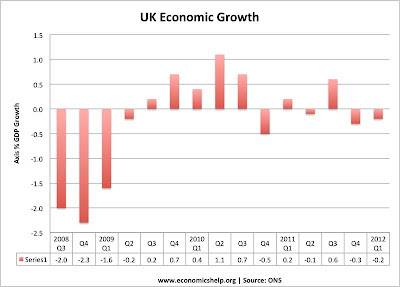 Figures published by ONS today, show that the UK is officially in a double dip recession. Some may wave the figures away saying it is only small fall - and it is just because of a big fall in construction. But, it is remarkable and worrying to see such a prolonged fall in GDP. (Bear in mind the UK's long run trend rate is 2.5%) But, GDP is still lower than in the 2008 peak. That's three years of falling living standards.

The 1970s, was also a time when the UK needed its only IMF bailout (UK national debt was only around 75% of GDP). These days, the IMF have much bigger challenges than a relatively small debt of 75%. The big concern for the IMF is that even a firewall of £1 trillion does nothing to tackle the underlying problems of the Eurozone.
Scottish Independence

The discovery of oil in the north Sea during the 1970s, was a factor in contributing to the re-emergence of Scottish nationalism. Economics looks to be the decisive issue in swaying whether people will vote for independence.