How does austerity affect the economy?

Several countries have recently implemented 'austerity packages' - attempts to reduce government spending and increase taxes, in an effort to reduce their budget deficit. It was hoped these austerity packages would 'restore confidence', improve countries fiscal position and enable long-term recovery.
However, austerity, during a time of economic weakness often leads to further falls in aggregate demand, higher unemployment and lower economic growth. 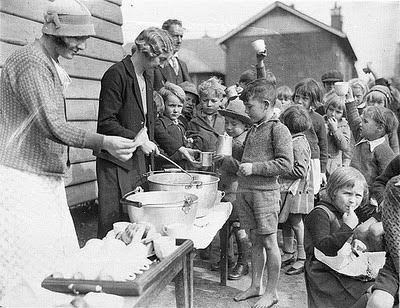 Lower demand. A cut in government spending and higher taxes will lead to lower aggregate demand and lower economic growth. If there is a fall in output, firms will employ less workers leading to higher unemployment. Also, government spending cuts may involve making public sector workers redundant. In addition, media coverage of 'austerity measures' tend to reduce consumer and business confidence. Fears over job losses and expectations of lower growth will encourage consumers to save rather than spend . This will be a further drag on consumer spending and economic growth (See also: paradox of thrift). As a result of austerity measures in 2011, the OECD now forecast negative growth of -0.8% for the Eurozone in 2012.

Competitiveness. It is hoped that austerity measures will help create greater pressure to reduce costs. These lower costs can help improve competitiveness. This is important for countries in the Euro, such as Ireland, Greece and Spain. In the boom years, they became uncompetitive leading to lower export demand and a current account deficit. Measures to deflate the economy should make exports more competitive. Ireland has been relatively successful in improving competitiveness, this is reflected in their move from a trade deficit to trade surplus. However, this attempt to improve competitiveness through lower inflation may take several years, and involve a high cost of lower growth and unemployment. 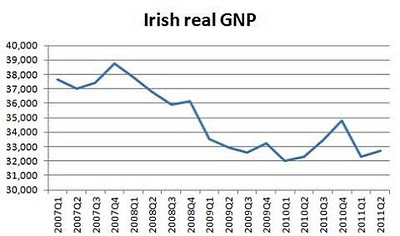 Ireland has been one of more 'successful' countries which has embarked on austerity, but this shows GNP is still significantly below pre-crisis levels (when real GNP was growing at an average rate of close to 5% a year)

Budget deficit. Higher taxes and lower spending will lead to an improvement in the government's budget deficit. This will help improve public finances in the long term.

However, if austerity measures cause lower economic growth, the government will also see a fall in cyclical tax revenues. e.g. increasing tax rates, should increase revenue. But, if higher taxes cause a recession, there will be less people working and so income tax revenue may actually fall. Also, if austerity measures cause unemployment, it will require higher government spending on benefits.


The UK's budget deficit fell slower than expected. This was partly because growth forecasts proved overly-optimistic. The austerity measures led to a slowdown in growth.

Austerity may not affect everyone in society equally. The biggest losers will be those who are made unemployed. Fiscal austerity will tend to hit the lowest paid the most because they will be most affected by stagnant wage growth. People in jobs with good long-term contracts may be insulated from downward wage pressures and growth in zero hour contracts.


What determines the impact of austerity?

What spending is cut? If a government cuts spending by raising the retirement age to 70, then this will not lead to lower growth. In fact it could help increase labour supply and increase productivity. However, if the government cut spending on current infrastructure investment, this will have a much greater impact on reducing domestic demand and lead to lower economic growth.

Monetary policy. Austerity involves lower domestic demand. However, if monetary policy can be loosened (e.g. lower interest rates or increased money supply) then the deflationary effects of spending cuts can be offset. For example, in the Euro, countries like Greece have fiscal austerity, but there is no corresponding loosening of monetary policy (e.g. the ECB increased interest rates in early 2011 and didn't pursue any quantitative easing). By contrast, the UK has more flexibility because the Bank of England pursued quantitative easing.

There have been successful cases of fiscal austerity - where it has been accompanied by a corresponding fall in interest rates and/or devaluation in the exchange rate.

Global growth. Austerity is not as damaging if the rest of the world economy is doing well. If global growth is strong, export demand will be strong. However, if all countries are experiencing a recession, then deflationary fiscal policy will have a greater impact in reducing domestic demand.

Central Bank intervention. Countries in the Euro, without a lender of last resort, are having to cut spending much quicker than countries outside the Euro. This is because bond yields on Euro debt has risen very quickly because markets fear liquidity shortages. 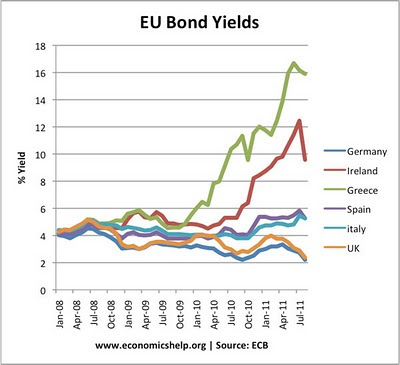 Posted by Tejvan Pettinger at 11:27 AM