A positive output gap - where growth is above the trend rate of growth, should lead to inflationary pressures.

A very simple measure of the output gap may be to assume productive capacity increases at 2.5% a year (close to the UK's average post war growth rate). Therefore, if you have a fall in GDP of 6% (like 2009), you would expect a large negative output gap, and minimal inflationary pressures.

In practise it can be more difficult to measure the output gap. For example, in the aftermath of a recession, there may be much less spare capacity than you might anticipate.
Also the situation may be confused by supply constraints in some industries, but spare capacity in others.
Nevertheless it is possible to make an estimate of how much spare capacity there is in the economy. 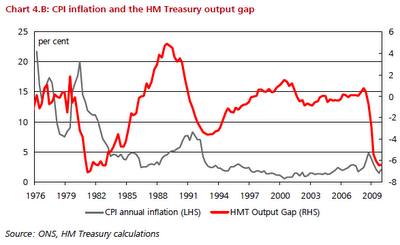 This graph shows the UK's estimated output gap (by HM Treasury) and inflation.
As you might expect there is often an inverse relationship. In the late 1980s, the Lawson boom led to a positive output gap and inflation rose to just under 10%. After the 1991/92 recession, the output gap became negative and inflation fell.

The graph doesn't show the recent rise in CPI inflation to 4%, but this rise in inflation has not been combined with a decline in the negative output graph.

The HM Treasury report suggests that many factors can affect inflation apart from the output gap. 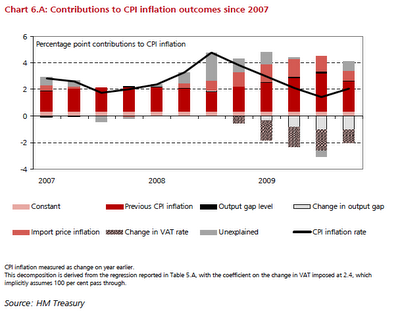 Nevertheless, estimating the output gap helps give a broader understanding of the nature of inflation and the degree of underlying (demand pull inflation)

Posted by Tejvan Pettinger at 9:22 AM