A recent report criticised a proposed new High Speed rail link between London and Birmingham (HS2) on the grounds that:
Supporters argue that demand for rail travel is continuing to grow. By 2020, projected rail use will have outstripped capacity. Investment is needed to provide more services and meet future demand. By providing extra capacity, it will relieve congestion on roads and improve the infrastructure of the UK economy. Also, by offering better quality, faster rail services, it will encourage more people to choose train. Like building new roads increased demand for car travel, building faster lines will create demand for train use.

Report calls for Rail scheme to be scrapped at Independent.

There may be a good case that investment funds may be better used on existing capacity. However, in this debate it is useful to take into account external benefits which are often ignored in public debate about the desirability of various transport schemes.

Death Rate by Mode of Transport 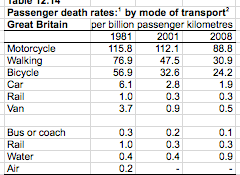 By comparing death rates by billion passenger KM, train travel is much safer than car use. A fatality rate of 1.9 per billion KM, compared to 0.3 billion KM for train. 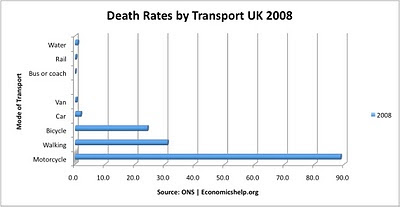 Source: ONS - Social Trends 40
This doesn't mean all high speed rail networks should automatically go ahead. But, when deciding, greater mention should be made of other externalities. Train travel does justify government subsidies, but often in the UK we have made decisions on the rail network based on simple profit and loss. This has left the UK, with a transport infrastructure which increases cost on business.

Posted by Tejvan Pettinger at 9:34 AM

I didn't know that walking was so deadly. But then of course we don't cover the kind of distances by walking that we cover by place or train, so I see where the statistic is coming from.

But I wonder if it takes into account how much I prolong my life by walking before I will finally get hit by a car? :-)

A faster and better impact on the economy would be to encourage home working. Up to 30% of the population could work from their homes. This is enabled through broadband and also provides a kicker to the knowledge economy. And it could happen now.
Let's kill HS2 and spend the money on new technologies.