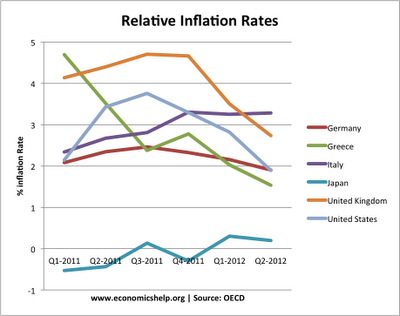 This graph of relative inflation rates showed that during the period shown, inflation in Greece fell from close to 5% to below 2%. This suggests that Greece will have become slightly more competitive in this period. 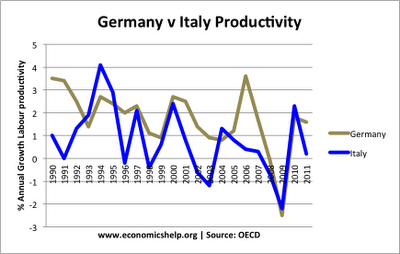 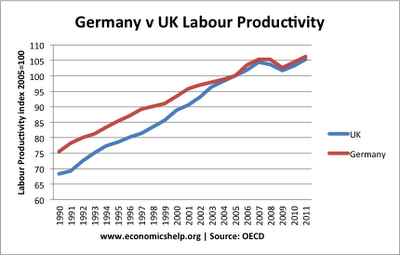 However, sometimes economies can artificially maintain a lower value of the exchange rate to maintain competitiveness. For example, China has been accused of exchange rate manipulation. China buys large quantities of US securities, this causes an increase in the value of the dollar and helps to keep the Yuan undervalued. Therefore, this helps Chinese exports to be more competitive and explains the large Chinese current account surplus

Competitiveness in the Euro

Tax rates on labour and corporations will be a factor in determining competitiveness. For example, higher labour taxes will increase the unit cost of labour faced by firms, leading to lower competitiveness.

It is argued that countries with more labour market regulations, and regulations about doing business will have higher costs and lower competitiveness. For example, the difficulty in gaining planning regulations to expand a factory.

The World Bank produces a list of countries which are the 'easiest places to do business'. The criteria include factors such as flexibility of labour markets, degree of regulations, protection of private property.

A key factor is the cost of tariffs and non-tariff barriers. For example, after the UK leaves the Single market, if it has regulatory divergence, then British business may have higher costs as a result of differing standards.

Posted by Tejvan Pettinger at 7:30 AM