An Evaluation of the MPC in Controlling Inflation

How Effective have the MPC been in meeting the Governments inflation target?

The MPC are responsible for setting interest rates and determining UK monetary policy. They seek to keep inflation close to the government’s target of CPI 2% +/-1 % 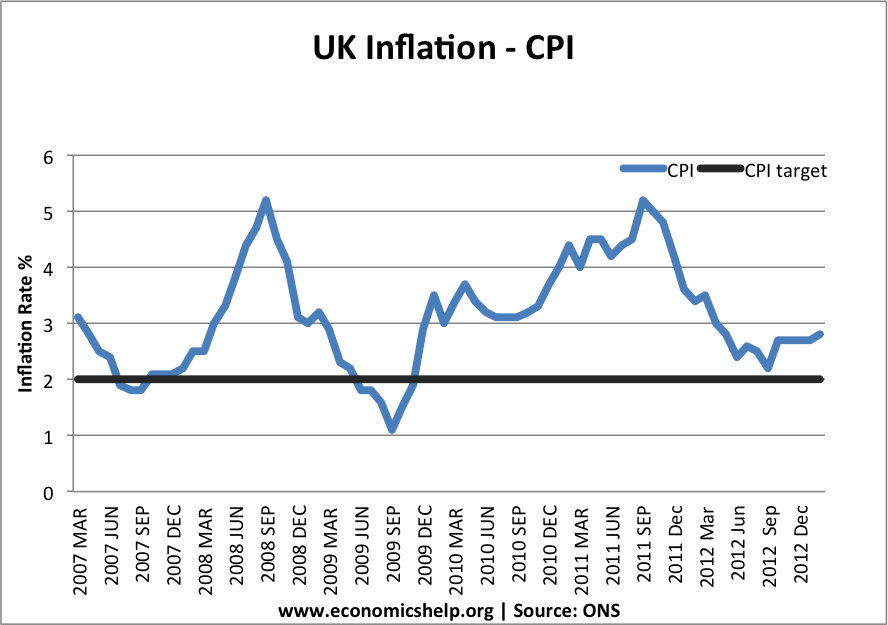 1. They are independent. They are not subject to political pressures. E.g. they are not tempted to keep interest rates low before an election. This used to be a problem for UK economy, with many experiences of boom and bust economic cycles.

2. Monetary Policy is pre-emptive. They try to prevent inflation before it occurs. They predict future inflation trends. If inflation looks to be increasing above the govts target then they can increase interest rates to reduce consumer spending and keep inflation on track.

3. MPC have reduced inflation expectations. People have confidence that inflation will remain low. Therefore wage demands are lower and it becomes easier to keep inflation low.

4. By targeting inflation directly they get the best overall picture of the economy rather than focusing on small aspects like the money supply.

5. Since 1997 UK inflation has remained close to the government’s target of 2%. This is much lower than UK inflation in the 1980s which reached 10%

6. Interests rates have a powerful effect in influencing UK consumer spending. This is because many people have mortgages or other types of loans.


Limitations of the MPC’s Effectiveness

1. Inflation is low but this is partly due to global pressures keeping inflation low. E.g. globalisation, low prices of raw materials and better technology. If these factors were to increase it would be much more difficult for the MPC to keep inflation low.

2. Interest rates have a time lag. It is estimated it takes 18 months for interest rates to have an effect. Therefore it becomes difficult to control inflation solely through interest rates.

4. It depends upon other components of AD. E.g. if consumer confidence is high then raising interest rates may have little effect on reducing consumer spending.

MPC have done a good job so far. However the real test may come when there is a rise in structural inflation or global instability.

See: Evaluation of MPC and ECB in aftermath of the credit crisis (2013)
Posted by Tejvan Pettinger at 2:54 PM

At the end it mentions global instability. I noticed that this was written before the financial crisis of 2008. How did this affect the MPC?

can anyone help me "how U.S overcome the problem of inflation"..in this blog it say more about U.K..i need it for my assignment..anyone??