A good Central Banker is supposed to be boring. But, the French are trying to make it a little more interesting by suggesting other economies are even worse than theirs. A kind of playground, 'my Dad earns more money than your dad'

Christian Noyer, the head of the Bank of France said: "When I look at our British friends, who are even more indebted than us and carrying a bigger deficit, what I see is that the ratings agencies so far don't seem to have noticed." 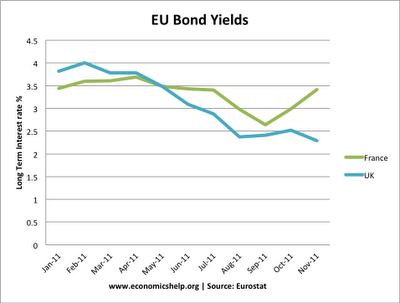 The difference between British and French situation is that France is in the Single Currency, the UK isn't. And it's rather worrying that the head of the Bank of France hasn't understood why there has been a sharp divergence in bond yields between Eurozone members and those outside. 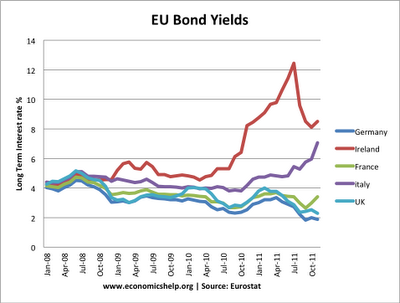 It may be unfair. Perhaps UK doesn't 'deserve' such a low bond yield compared to other European countries. Perhaps the UK was just lucky to stay out of Euro. But, that's the drawback of being in a single currency, with no lender of last resort and no ability to devalue. The problem is that the EU never give the impression they appreciate why they are in such difficulty.

The American credit rating agency Fitch, concluded that a "comprehensive solution" to the eurozone crisis was "technically and politically beyond reach" And I tend to agree with them.

UK debt has been increasing at a faster rate because of a bigger budget deficit.