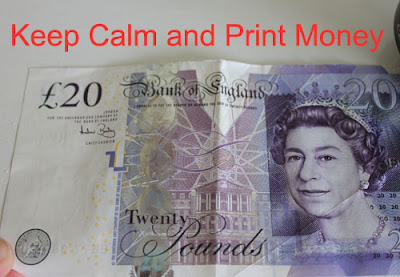 It is not often Central Bankers get carried away with emotive language, but the governor of the Bank of England recently wrote:


"This is the most serious financial crisis we've seen at least since the 1930s, if not ever,"

As if aware of his stark comparison with the great depression, he adds basically - 'keep calm and print money'


"We're having to deal with very unusual circumstances, and to act calmly and do the right thing. The right thing at present is to create some more money to inject into the economy.

The Bank are worried about a global slump in demand and so are electronically creating an extra £75bn to buy bonds and securities. The aim of this quantitative easing is to
See: Quantitative easing

Why the Need for More Quantitative Easing?
CPI inflation in the UK has spiked recently and is most likely to rise to over 5%, but the bank feel in medium term inflation will undershoot the inflation target of 2%.

Is this extra Quantitative Easing good for the government?

Is This an indication the government have Failed?

Two years ago, the chancellor George Osborne wrote (when Labour were in power") "Quantitative easing was the last refuge of desperate governments" -This move is an indication that the economy is in dire straits - and this is partly due to the government's decision to be so pro-active in cutting spending and going for austerity rather than growth. But, if quantitative easing is able to deliver economic recovery. The government may get the best of both worlds - higher growth and deficit reduction.

However, there is no guarantee in this economic climate that quantitative easing will be able to wave its magic wand; it is largely untried unorthodox monetary policy.


Is this Bad news for savers?

Yes, at least in the short term. Quantitative easing will push down bond yields leading to lower interest rates and lower incomes for those who rely on savings. Combined with high inflation, this represents a squeeze on income for savers.

However, in the long run, it is in the best interests of savers to have economic recovery which will enable a return to normal growth rates and normal interest rates. Now is not the time to fight 'temporary inflation and risk pushing UK into a deflationary trap like the Great Depression.

Don't Banks just use proceeds of Quantitative easing to speculate on gold and other safe investments and not lend to business?

Quantitative easing is imperfect, but there aren't many other alternatives.

see: who benefits from quantitative easing?

Posted by Tejvan Pettinger at 8:39 AM

It is all very well that the government as well as BoE expect this QE to help the growth but first;

-How much of the 75 billions will physically be released to the market(money supply),

-Would it not push the inflation well over say, 10%. or

All these questions point to some sort of uncertainty which is the nightmare for economists. God help..