How Will the Financial Crisis End?

The financial crisis which erupted in 2007 caused a very deep balance sheet recession. It's effects are still leaving a dark cloud over the global economy. There are real concerns over
After the initial stimulus attempts of 2008 and 2009, policy makers have fallen back on short term fiscal austerity as they worry primarily over budget deficits. Yet, this is likely to prolong the economic recession.
What is Happening at the Moment
How Will it End?
This policy of deflation will gradually restore competitiveness. Eventually there will be strong economic growth, but it could take several years.
No Quick End
There will be no quick end to high unemployment and sluggish economic growth.
If policy makers were bold and imaginative, they could have been doing much more to stimulate the economy. They should have avoided the rush to short term austerity. But, I can't see European or US governments simultaneously agreeing on a short term fiscal stimulus package, whilst agreeing on real long term fiscal cuts to entitlement spending.
Europe is even more beleaguered as the unfortunate ECB seem unwilling to diagnose the fundamental problem - which is not just sovereign debt but a slide into a double dip recession which will exacerbate everyone's debt.
Could It Get Worse?
If Europe really messes up and countries other than Greece slip into default, there is potential for crisis to worse. If it led to ever greater rounds of fiscal austerity, a small double dip recession could become a full scale depression. It is possible. It is hard to forecast at this stage. There is a lot of hope, that gradually things will improve.
Examples of Balance Sheet Recessions
1. Japan - the lost decade 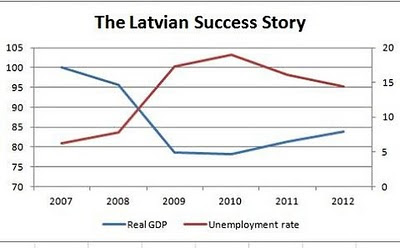 A Kind of Recovery, but unemployment remains high, and GDP well below pre-crisis levels.
Posted by Tejvan Pettinger at 9:23 AM