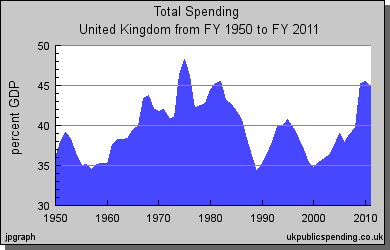 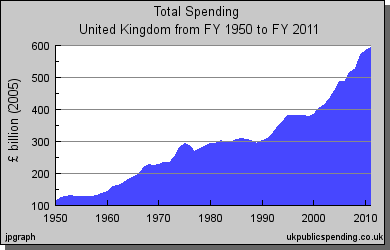 In real terms, (adjusted for inflation) spending has been increasing constantly apart from the odd dip.

It was of the irony's of the Thatcher years (and Reagan years) that for all the rhetoric of 'rolling back the frontiers of the state, they never really reduced the size of the government.

The UK has seen the government's share of GDP fluctuate from between 35% and 45%, but, around this average, it has stayed fairly constant since the second world war.

Away from the impact of spending cuts on economic growth. How much should UK government be spending? If the economy was strong, should we be seeking to cut government spending?

You could easily write a book and still have more to write. I (try) to take a non-dogmatic approach to government spending. You can't label government spending as 'good' or 'bad'. It depends on what and how it is targetted. It can be good if it is used in the right way it can also be inefficient and distort economic behaviour.

Some Areas of Concern
Related

Posted by Tejvan Pettinger at 1:42 AM