The US economy has emerged from recession. But, fundamental problems remain. In particular the US need to manage the strains on public finances whilst maintaining the fragile growth and recovery.

After the deep recession of 2008-09, the US has lost a large amount of potential GDP. 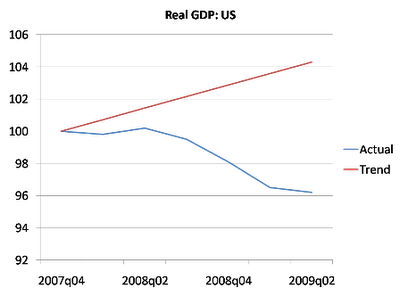 Source: Macro Situation The US economy has lost output equivalent to 8% of GDP or $1 trillion.

US unemployment has increased sharply during the recession. It is indicative of the lost output. But, also gives a statistic to the human cost of the recession. Unemployment is one of the most stressful events in life and can lead to significant social problems, especially given the limited relief for unemployment in the US. 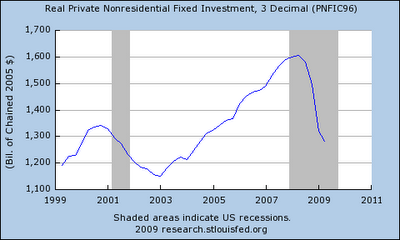 A recession means lost output now, but, the depth of the recession is damaging prospect for future output as the fall in investment is lowering potential future capacity.

Unfortunately, the US was running a structural deficit before the recession (due to combination of tax cuts, higher spending). The demographic factors in the US mean there will be increased demands on government spending as an ageing population need more pensions, health care and pay less tax. Like many other countries, the US faces the dilemma of keeping government borrowing under control without harming Aggregate demand.

The US has been running a persistent current account deficit for over a decade. Since the credit crunch it has been more difficult to attract capital flows to finance this deficit. The deficit is indicative of an unbalanced economy - based on high spending and low saving. This is changing as the US saving rate rises, but, there is more rebalancing to occur - needing higher savings and lower spending. This will also put downward pressure on the US.

Debt defaults in the US continue to rise. (See: Default rate on US Loans) This is damaging the balance sheets of banks making them reluctant to lend. House prices have fallen significantly and show few signs of rebounding compounding the losses of banks.