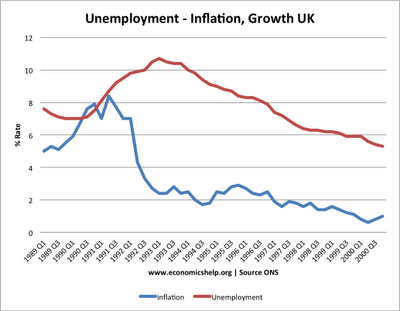 The 1990s began with a severe recession, and a humiliating exit from the ERM, leading to higher unemployment.

The mirage of the 1980s bubble had exploded. Inflation, once thought to be defeated once again had reared its ugly head. All the hard won gains of the 1980s seemed to be lost.

Belatedly, the government sought to tackle the bubble inflation indirectly through the Exchange Rate Mechanism - a semi fixed exchange rate. This required exceptionally high interest rates which made a mild recession into a much deeper recession, - unemployment soared. More detail - ERM Crisis 1992

The worst hit area of the economy was the housing market. After enjoying the heady days of the late 80s with 30% annual growth in house prices, the housing market slumped as people simply couldn't afford the record mortgage interest payments. House prices began falling in 1990, and were still falling in 1995. Adjusted for inflation, the real house price fall was even more dramatic.

As the economy recovered, the primary objective of economic policy was geared towards avoiding future booms and busts, which the UK economy seemed particularly prone to.

Rather than target indirectly through money supply or exchange rate, the Bank of England were given a specific inflation target of RPI 2.5% +/-1

By, 1997, the Bank of England were made independent, giving them control of setting interest rates. It was hoped, an independent Bank would not be vulnerable to the political cycle of creating a convenient economic boom before an election. It was felt the Bank of England would have the willingness to make unpopular decision in keeping inflation under check and avoid the boom and bust which had weighed down the UK economy. Importantly, it was hoped, that people would have confidence in the Bank of England and this would help permanently reduce inflation expectations.

On a narrow judgement, this has been remarkably successful. Inflation, remained low throughout the 1990s and into the 2000s, since the end of the Lawson boom, UK inflation has been close to the government's target of 2%, apart from the odd temporary deviations. It is certainly nothing like the inflation problems of the 1970s and 1980s.

By, the end of the 1990s, the economy seemed to be doing well, and quietly there was growing optimism. Already people were talking of the end of boom and bust, the new buzzword was the period of great stability.

It seemed that this new policy of inflation targeting had solved all the major economic problems at a stroke. This new found optimism was perhaps summed up by a quote by Paul Krugman in 1997. Quote

“If you want a simple model for predicting the unemployment rate in the United States over the next few years, here it is: it will be what [Alan] Greenspan wants it to be, plus or minus a random error reflecting the fact that he is not quite God.”

After the 1992 recession, a flexible labour market helped unemployment fall quickly (much more quickly than after the 1980s recession)

Economic growth was positive, unemployment falling rapidly and towards the end of the decade, the government even recorded a budget surplus.... Surely nothing could go wrong now?

Posted by Tejvan Pettinger at 9:51 AM

not bad it helped me out for my english research. so ya, also very detailed...

not bad it helped me out for my epq research. so ya, also very detailed