The Taylor rule is a formula for setting interest rates depending on changes in the inflation rate and economic growth.

Example of Taylor Rule:
Using this formula, it is clear that in the period 2002-04, the US Federal Reserve kept interest rates too low. These low interest rate were a key factor (though by no means the only cause) of a boom in credit and a boom in house prices.

Interest Rates Too Low in US Using Taylor Rule 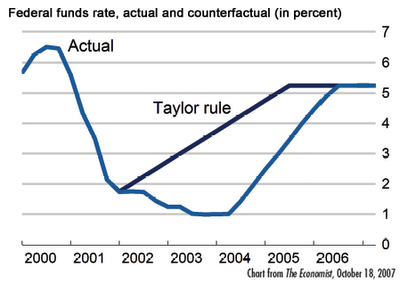 The interesting thing is what the Taylor rule says about current interest rates. Since GDP in US has collapsed by - 4% (when growth trend is about 2%) it means that GDP is much lower than potential. Paul Krugman estimated that using the Taylor rule, the US should give a nominal interest rate of -7%. This indicates why the Federal Reserve are having to resort to quantitative easing. They can't cut interest rates below 0%, so they need to resort to unorthodox measures to boost the economy.

Taylor Rule and Suggested Interest Rate for US

Posted by Tejvan Pettinger at 12:07 PM

I have always wondered why economic growth and inflation are seen together, one seems to be good, the other not... I understand it theoretically... But still the question stays in my mind...
I have never had the opportunity to ask this question from anyone, because I knew they would give me an answer that I already knew.
You know we are keen of economic growth... But then there comes inflation, I just don't get it. Which one is the cause of the other, and is there a certian inflation rate that helps the economy to grow, how can we calculate that desired inflation rate?

I believe that both inflation and economic growth can cause the other to occur. If there is inflation it will cause an increase in the money supply resulting in more spending and higher aggregate demand.
Then is there is higher economic growth which is an increase in output investment will increase and the demand for goods will be greater, pushing up prices.
This is a great question you have, it is a fundamental thing that is not fully understood by many people ( me included) I'm not really sure if this is 100% correct, but it is the best way that I understand it.