What is the Cause of Unemployment in Europe?

Cyclical Unemployment The sharp rise in unemployment since the start of the recession in 2009 reflects the impact of falling demand on jobs and employment.

Conservatism of ECB. The ECB has a strong reputation for keeping inflation low. The over-riding target of monetary policy is low inflation and arguably this holy grail of low inflation means they are willing to sacrifice growth and investment (e.g. decision to increase interest rates in 2011 because of fears over inflation). It explains the contrast in response to the ECB and Bank of England to the current recession. (Theodore Peligidis 1998 link)

Overvalued Exchange Rate. Some countries in southern Europe, such as Greece, Portugal and Spain have experienced falling competitiveness within the Eurozone. In a single currency, they have been unable to devalue and this has made exports less competitive - leading to lower export demand.

High Unemployment Benefits. European states tend to have generous welfare benefits which decrease incentive to get a job. However, countries like the Netherlands have seen low unemployment rates despite similar benefit rates.

Labour Market Rigidities. European economies often have generous protection for workers. e.g. hard to hire and fire workers, maximum working week. Protection for trades unions. This gives protection for 'insiders' but not outsiders. It also could explain why European unemployment could be for a longer duration. Within the political systems there is often reluctance to reform labour market policies which protect certain workers at the expense of the unemployed. (Bean 1994)

Skills Based Changes. Factors such as globalisation and increased specialisation have led to rapid changes in demand for skilled workers. The consequence is that unskilled workers have found it more difficult to gain employment. (Lawrence 1994, Krugman 1995, Baldwin and Cain 1997) 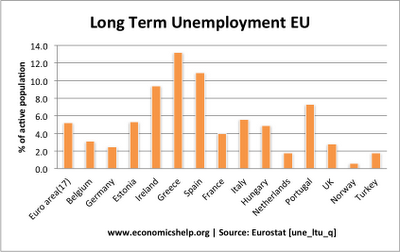 Hysteresis. Long term unemployment can make it more difficult for people to find work. Long-term unemployment is rising and also encouraging people to give up and leave the labour force. When we look at inactivity rates, the employment situation looks even worse. 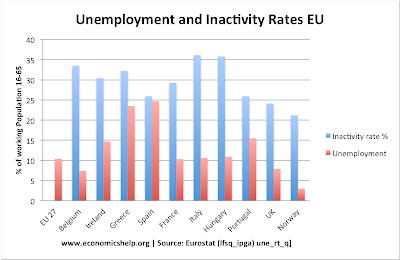 Unemployment is underestimated in the US. US unemployment rates are lower, but arguably there is a higher disguised rate of unemployment including low paid part time jobs.

The more you look into European unemployment the more you realise there is no simple answer. It is unsatisfactory to explain it all away with blaming labour market rigidities and generous welfare benefits. O.J.Blancard (2004) states "High social protection is not inconsistent with low unemployment. However, it must be provided efficiently."
It is also important to consider both demand and supply side policies. The scale of the current EU recession illustrate how the ECB's conservatism in Monetary policy could adversely affect unemployment in both the short term and longer term.
Further Reading

Posted by Tejvan Pettinger at 9:17 AM

Here is an interesting article on a possible cause for European unemployment - flexicurity. What do you think?

Europe has fallen into a crisis little believable at times, no one understands how a continent so rich, so today is economic crisis. But I think slowly out. Many say it will end as Latin America, I believe that there is a sleeping lion, wait for him to wake ...
Regards,
Carol | Recetas Faciles