“In truth, the gold standard is already a barbarous relic.” 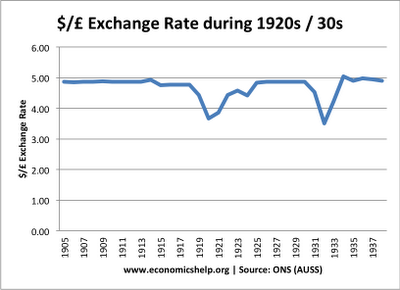 The Gold Standard led to problems for the UK manufacturing sector:

Bretton Woods
Some (Austrian economists) argue we should rejoin the gold standard to protect against inflation and the power of Central banks to inflate away debt which benefits governments and those with debts but destroys the income of savers.

Posted by Tejvan Pettinger at 9:03 AM

(1) Is there any way of setting up a Gold Standard which would avoid the past disadvantages you outline?

(2) Given that logical deduction (as per the Austrian economists) must use some, albeit basic, empirical data - after all, "for every debit there is a credit" - can there ever be a rapprochment between this camp and the econometricians?

﻿Under the gold standard, as described, a country is only as financially stable as it has a sufficient
reserve of gold to back its currency. This means, those countries that are developing have little, if
any opportunity to grow if they do not have a gold reserve backing their currency. Moreover,
there is the reluctance, if not the impossibility of borrowing because by definition, the borrower is
acquiring a portion of wealth that is not backed by anything other than his credit and that is not
gold. Indeed, the ability to lend under the gold standard carries with it the same objections as
printing money because the lender is in effect extending value that is not backed up by gold
causing the same inflationary conditions as if money had been printed.

So why is it that under certain conditions, non gold standard economies are able to maintain a
stable, non-inflationary status? The reason lies in the maintaining the standard of value for the
currency by allowing the free market as part of the equation to regulate the currency’s supply and
demand. On the other hand, where government engages in passing programs that cannot be paid
for by current revenues, which represent the level of national productivity, the supply of money
increases without being backed by productivity, the equivalent of gold, and the trend is
inflationary. As the increase in productivity of labor justifies increased wages without increasing
the costs of the product, so the increase in productivity results in increased revenues that allow for
financing government programs. Moreover, where the gold standard inhibits lending because of
the relative scarcity of the metal to finance programs, the system of a central monetary banking
system that monitors and regulates bank reserves and economic conditions can provide for
substantial lending programs, which increase the money supply but where the potential productive
return on the investment increasing the supply of goods and/or serves as an offset to the economic
affect caused by the increase in the money supply. Both systems are susceptible to abuse. The
gold standard by government manipulation of the value of gold relative to its currency and the
monetary fiat system that allows government to print money to finance programs otherwise
unsupported by existing revenues.

Nice essay. Something missing though…like a very MAJOR thing missing. Currency notes arose as receipts for gold, which is why they were based on gold in the first place. You hand in your gold, you get a receipt, which you can then use to trade instead of carrying your gold around. At any time, you can redeem your receipt for the gold, because it is a receipt, it is NOT MONEY. Whoever decided to allow these receipts to be unexchangeable for the gold they represent to the full amount is a thief. When currency became zero backed by gold the robbery became complete. A piece of paper in exchange for gold WAS NOT THE AGREEMENT. The agreement was to take a piece of paper as a RECEIPT for the gold STILL OWNED by the bearer of the gold. Not allowing the bearer to redeem his gold, means the bearer has been robbed, and given paper while the bank keeps the gold. It would be interesting to know the original legislation that allowed this to happen. In the UK that piece of legislation may be legal but it is unlawful, because it legalises stealing. HM government does not have the power to break Common Law as each Bill must be presented for ratification to the Monarch, who has sworn an oath to uphold the law of the land, which is COMMON LAW. (commit no harm or loss to others, and no fraud in business dealings.).