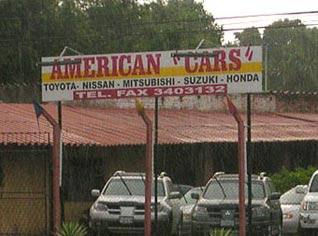 It's not a good time to be a car manufacturer. Several years of over supply have been exacerbated by a slump in global demand. Even falling gas prices have done little to revive a car market in the doldrums. General Motors is on the verge of bankruptcy, and it presents politicians with a difficult dilemma of what, if anything, they should do.

The Case for A Bailout.

The Case Against a Bailout

From an economic perspective, it is hard to justify a huge government bailout for a declining industry. It is a very expensive and inefficient way, to prevent unemployment. If the government really have $25 billion to try and protect jobs in the car industry, they might be better off letting General Motors go under, and use this money to try and retrain workers, and stimulate investment in the towns most affected. At least the government would have something to show for their money, rather than pouring it down the black hole of General Motors accounts. The government could then say at least it is trying to help deal with the very high human cost of General Motors bankruptcy.
Posted by Tejvan Pettinger at 7:15 AM

This article is excellent!

Real estate, the banks and financial institution fall out was the first level of failure and now many other layers of business are failing.

Will the government be able to bail out everyone? How will it pick and choose who to save and who to let fall? Isn't that the purpose of a free market economy: let market forces decide who will go and who will survive.

Government can only further complicate the issues. The reason they wanted to save the banks was to ward off panic in the markets but it didn't quite have that effect. Whatever they do will not have quite the effect they wish for.

Forbes recently said that the economic downturn has reached the bottom. I doubt that. People are not buying. They are holding onto their cash.

There are many more layers of collapse to come. How will the government know what to do and who to save? How will it know what will be the effect of its choices?

I think the government making these fundamental kinds of economic choices will further complicate the problems.

No Bailout until the UAW sees the light.

It's an interesting article. If the bailout can stop more than 3 million jobs that are going to be lost, then it's worth giving a try. In that case, the big three have to revamp their whole style of operation, from top to bottom. The private jet flying millionaire CEOs should be given a jolt to bring them back to reality.

Gone were the days when GM ruled the world and was at the top of Fortune 500 listing. So much has been said about the credit slump that banks are now offering better schemes for
car loans to lure the already declining market for car aficionados. I wish the interest rates would only be more realistic as this financial is not about to end anytime soon.