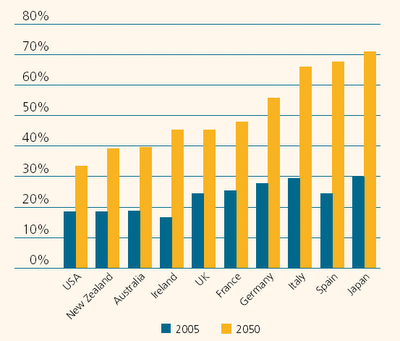 Source: Dept for work and Pensions
Many Western OECD economies are facing an unwelcome population projection. As the baby boomer generation starts to retire (around 2016), the dependency ratio (number of people not working to number of people working) is forecast to rise. This ageing population is exacerbated by declining birth rates which is reducing the number of working age adults. Some countries are affected more than others. For example:

The government will be faced with higher spending commitments and lower tax receipts. If the government doesn't radically change policy, national debt is likely to increase. Furthermore, the government will not be borrowing to finance sustainable investment but making transfer payments which don't boost productivity.

Is it Really The End of the World?

Some doomsayers suggest that the ageing population could really cripple western economies leaving governments with unmanageable debts - leading to inflation and / or higher interest rates. However, bear in mind. 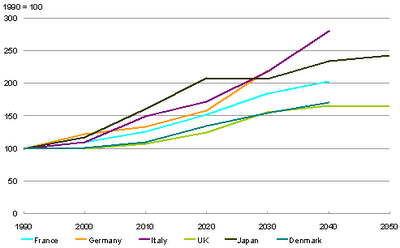 What Choices Do the Government Have?

With prospect of higher spending and relatively lower tax receipts, the government may have to consider some politically unpopular policies.
The problem is arguing for the above policies is hardly going to win you favours with the electorate, therefore there is a politically pressure to keep delaying these policies for later. Which policy would you be happy to accept?
Posted by Tejvan Pettinger at 7:59 AM

I am glad someone is blogging about this. I do too but from an environmental viewpoint.

The keyword is sustainability. Balancing working people with dependent people is not sustainable.

Sure, the immigration route is a quick fix but those migrants will grow old too thus requiring even more migrants. A never-ending cycle.

Overpopulation will be a problem for the planet this century, as more people chase fewer resources. Using Europe as a pressure release for Africa and Mid-East population and employment problems will do nothing for those parts of the globe. Millions might come to Europe but they will be more than replaced back home by an unchecked birth-rate.

Instead of investing in pensions people should invest in invalidity insurance so they can be looked after when they are finally unable to work.

Most people in the world do not have a pension so why we in the best think it is some God-given right is rather too much to ask for.

A sustainable economy not based on chanting the mantra of infinite economic growth on a finite planet must come first afore people can have the luxury of not working in old age.

The rise in the over sixties is mainly the result in the rise of the baby boomers in the 40's.
Something i have had to deal with all thru my life,
Hi class sizes, Hi youth unemployment in the 60's and now too many pensioners.
The Good news is all us baby boomers will fall of our perch in 2020 to 2030, causing a rapid fall in population. Problem solved
Regarding Pensions
This was the biggest pyramid scam of all time.
When the universal pension was brought in most of the labouring classes died at 55 to 60 years of age. Only the rise No's of Middle classes benifited. But now us labouring classes are living longer, the answer is to raise the retirement age.

The bigger picture shows that pensions et al are the least of our concerns - when oil begins to peak and therefore demand outstrips supply, where are we to get energy and food from? (fertilisers in all intensive farming come from oil).
The effects of global warming are now unstoppable and will mean very significant changes to world wide resources. The uk now imports most of its energy and food. Perhaps we shall be able to barter for our plentiful water?

I agree with James. The current growth-based economic model is a massive pyramid scam and is unsustainable.
In the long run human overpopulation and its consequence will increasingly outweigh all other considerations. But govts will continue to do nothing about this because the problem and answer is longer term, will need a universal response Also because bad pension models (current workers pay for current retirees) and dependance on growth-based economies con people into believing we can't cut back on population growth. Ditto developing countries with No pensions who believe that childbirth IS their pension provision.

Population decline is continuously sold as a PROBLEM in the press. It is not - it is fundamentally necessary.

It is clear that the "economic growth" paradigm is past its time. We have to look at sustainablity and reducing population.

If anyone doubts this take a look at this video set..

Almost everyone who is 60 now will be dead in 30 years time and the 'Demographic time bomb' disappears as the balance is restored, it really is that simple.

hey listen guys, just treat the foreign migrant workers the same way we treat our temps. simply just do not renew their visa when they reach 30 and do not give them indefinate leave to remain only in exceptional circumstances

also there are too many malthusian comments on here.

as population increases other factors also increase so the world can support even higher populations such as advances in agriculture and technology and architecture and engineering and, and, and,...i think i made my point.