US Debt as a % of GDP Chart 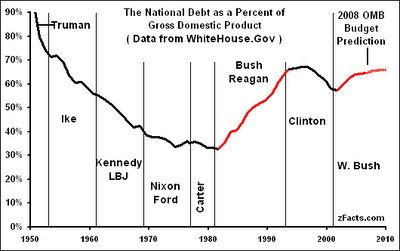 This is perhaps a more meaningful measure of GDP. If National Debt increases 1% every year, but GDP increases by 2%, the National Debt will become a smaller % of the nation's output. You can see there was a huge surge in National Debt during the Second World War, which took many decades to reduce. From this graph we can see that National debt is not only increasing in real terms, but, increasing faster than the rate of economic growth.

When the Government effectively guaranteed Freddie Mac and Fannie Mae, they didn't included their liabilities on the National debt statistics. The argument is that they are basically sound companies. But, if they did lose more on mortgage defaults, it would increase national debt.

Forecasts for US National Debt

The current crisis will increase the US national debt because:
Henry Paulson is asking for an increase in the legal ceiling on federal debt to $11.3 trillion or 70% of GDP.

However, there are concerns that a prolonged slump in the economy and house prices could lead to an even bigger national debt. If house prices keep falling and if unemployment rates rise sharply there could be even more defaults in mortgages. Given government intervention it appears that mortgage debt is becoming closely linked to National Debt.

How Is National debt Financed?

The National Debt is financed by selling Treasury bills and bonds to the private sector. They are then bought by private individuals, investment trusts, pension funds. Some of these are bought by foreign investors e.g. Chinese banks with large foreign exchange surplus.

Foreign ownership of the National debt has increased to 25% of the total - How is debt financed
The biggest holdings of US National debt is:

With increased liabilities in addition to the demographic changes, some feel that the small risk of the US government defaulting on debt has increased substantially. The credit swap on US debt has increased suggesting that markets think the likelyhood of debt default has increased. If this were to happen (or even if people felt it a real possibility, dollar assets would be sold causing a run on the dollar.) See: US is on verge of bankruptcy

Posted by Tejvan Pettinger at 8:57 AM

We can also make money and do business in buying and selling debt portfolios. just visit www.fitzdebt.com