Why Has A Higher Minimum Wage Increased Employment in the UK?

Readers Question: Why Does an Increase in the Minimum Wage not Cause Unemployment?

Classical Economic theory predicts that an increase in the Minimum wage should lead to unemployment. If the minimum wage(Wtu) is placed above the equilibrium We, demand for labour falls creating unemployment of Q2 - Q1 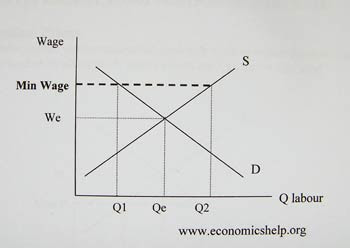 In a survey amongst economists by Dan Fuller (2003), he found 46% of Economists agreed with the statement that “minimum wages cause unemployment amongst unskilled workers” only 24% disagreed with this statement. [1]

However, the experience of the UK is that increasing the minimum wage has been compatible with falling unemployment and rising levels of employment.
In 1999, UK unemployment was 1,822,000 between January and March.(ILO method)
by 2008, UK unemployment has fallen to 1.61 million or 5.25%. Employment rates have also increased to 74%. The claimant count method is even lower at only 793,000 UK Unemployment stats

The experience of the UK is that a 67% increase in the NMW has reduced unemployment and increased employment. The UK is not isolated, in the US, studies have also show a link between increasing the NMW wage and negligible effects on employment. E.g. David Card and Alan Krueger, in their 1997 book Myth and Measurement: The New Economics of the Minimum Wage

Reasons Why Higher Minimum Wage has Led to Increased Employment

1. Strong Economic Growth. In period of economic growth, firms employ more workers as there is more demand to produce goods. Economic growth in the UK has averaged 2.5% since 1999

2. Monoposony Power. Classical theory assumes labour markets are competitive, but, in practice workers often face employers with buying power. This means firms are able to pay workers less than the market wage. Therefore, when a government artificially raises wages, firms can actually afford to pay them. It is argued minimum wage legislation is similar to anti trust regulation. [see: Monopsony and Minimum wages]

3. Increased Productivity. A study by David Metcalf [3] found that firms responded to increased wages by increasing the productivity of workers, especially in the service sector. This is important because it suggests that higher wages can actually help increase productivity in the economy.

4. Lower hours. Rather than make workers redundant, firms have reduced the average hours worked. This is related to part 3, firms try to get higher productivity in a shorter time, so they can afford the minimum wage.

5. Pass on Cost increases. Because the minimum wage affects all firms, it is easier for the cost increases to be passed onto consumers. e.g. because all cleaning firms have higher wage costs, they can all increase their prices. If the wage increase just affected one firm, they would become uncompetitive. (note: the rise in prices has not led to significant inflation in the UK)

6. Avoidance of Minimum Wage. It is uncertain to ascertain the extent of this problem, but some firms have circumvented the minimum wage legislation by employing immigrant labour and paying them lower wages. It also makes it more attractive to employ young workers.

Posted by Tejvan Pettinger at 9:42 AM

I honestly find these arguments weak and unimpressive. Correlation doesn't equal causation, and it seems premature to believe it does in the UK.

Strong economic growth? That doesn't contrast how the labor market dynamics might have looked had there not been a minimum wage.

Your third and fourth points contradict. You cans postulate that there was increased productivity in shorter periods of time, but without any empirical evidence to back up that assertion you're accomplishing little more than throwing around speculation.

In fact, I wouldn't be surprised to see much higher productivity on the whole without minimum wage.

The wide-scale economic impact of not passing the costs on, as you say, is also unaccounted for in the Metcalf-style analysis.

If you took each reason and contrasted it to a system without the minimum wage hike, I think you'd have a difficult argument to prove.

The empirical evidence for 3 and 4 is in Metcalfe study http://ideas.repec.org/p/cep/cepdps/dp0781.html which I linked to in the article.

3 and 4 don't contradict, if workers produce the same with lower hours that is the definition of increased productivity. see pdf for empirical data.

How would you explain rising minimum wage and falling unemployment?

Why workers' productivity increase because of a rise in NMW ? because they foresee that firms might increase their wage futher so they have some incentives to work efficiently or they are just so happy with it and have a better morale ? If they dont have that ability to foresee that potential increase in wage , I think they just remain the same productivity level as before and enjoy whay they've got currently . As to the 3$4 point , will the workers accept a rise in productivity to finish same amount of task within fewer hours ?
Their total income is reduced because of fewer hours worked even if they want to work longer . Whats more , they have to work harder to finish the work in the given time .Would the workers like to accept that ?

I was looking for a decent discussion on this subject and found this!!

2. You have argued that unemployment is not increased. This is not the same as arguing that employment has been increased.

3. Again, you have not shown how higher wages have increased employment.

4. So does lower hours mean they employ more people? Even if this is true, they are presumably not fully employed.

5. Again, no evidence that employment has increased. Also, how can you assume that this is not inflationary? It's a bit like saying that eating 10 Big Macs won't lead to weight gain if you walk the 1/4 mile home.

6. The worst argument of all: employment has not been affected by the NMW because employers have ignored it!

Just a few short years on, and this piece is looking a little rediculous. Did the author ever stop to consider the total economic impossibility of his arguments?