I recently wrote an article about Inflation in Zimbabwe, which has recently passed the 100,000% causing widespread hardship for the population.

— During the hyperinflation episode in Germany from 1922 to 1923, the Weimar Republic printed postage stamps with a face value of one billion marks, as prices doubled every two days. At one point in 1923, the exchange rate equalled one trillion Marks to one dollar 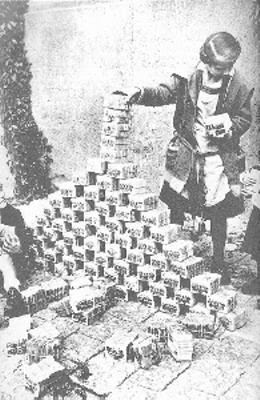 Usually, countries with hyper inflation have the following features

2. Menu Costs. These are the costs of dealing with rapidly rising inflation.

3. Lack of Confidence in the Finance Sector

The experience of inflation can become engraved on people's mind making them suspicious of financers, bankers and the general economic system. It is no coincidence the Nazi party were able to feed off these suspicions to introduce extremist policies.

4. Lack of Investment and Economic Growth

Ultimately hyperinflation causes people to have lower spending and firms lose confidence in investing. This can cause the economy to slow down and reduce living standards.

Posted by Tejvan Pettinger at 2:15 PM

Thankyou so much!I value your time and effort involved to produce the article on Hyperinflation- an excellent summary of the reality faced currently by Zimbabwians

Nice article!
but you should relate it to zimbabwe and write about unemployment as well!=)

I have a collection of explanations for the mechanics of hyperinflation. There are a number of different ways to look at it and I think it gives a deeper understanding if you get them all.

helping me out so much right now... thank you