The interesting thing is that, even as late as July 2011, the ECB responded to the 'threat of inflation' by increasing interest rates. This was despite increasing evidence of a double dip recession.

By contrast, the Bank of England have tolerated a much higher inflation rate. They have not increased interest rates from the low of 0.5%, but have pursued another round of quantitative easing.

This reflects different approaches to the management of the economy.

The ECB were worried that the temporary blip in inflation would lead to higher inflation expectations and feed through into a real inflation problem. Therefore, they took preventative action and increased interest rates.

This graph shows 'core inflation' in the Eurozone was below target. But, the ECB still increased interest rates.

The rate rise to 1.5%, may seem small, but it sent a clear signal about the ECB's priorities. They were willing to tighten monetary policy - even if this risked underlying deflationary pressure.

The Bank of England, argued that the rise in inflation was purely due to temporary factors, and in 2012, the problem will be that inflation will rapidly fall below the government's target of 2%. 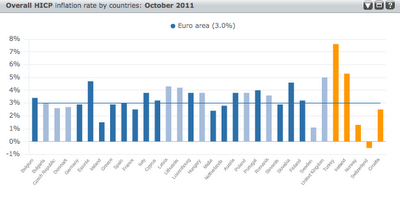 It is likely that the Eurozone will also see a rapid drop in inflation to close to 0% in 2012. This is because
I agreed with the Bank of England stance, and believe the slowdown in growth that has occurred in 2012 will cause inflation to plummet in 2012. By contrast, the ECB have made a mistake, the result will be lower growth and higher unemployment, especially in the periphery areas of Europe.

More on this topic: ECB v Bank of England
Posted by Tejvan Pettinger at 10:28 AM