In previous posts, I have suggested underlying 'core' inflation is less than headline inflation. Combined with sluggish growth, weak pay growth, large output gap and deflationary fiscal policy (government spending cuts / tax rises) it would be a mistake to depress the economy. I also believe that in a period of cost push inflation, there is a case for a higher inflation target.

Yet, despite agreeing with this analysis and feel interest rate hikes should currently wait, I still find Andrew Sentance's speech quite compelling. He lists Ten Reasons to Tighten.

Essentially, his argument is: 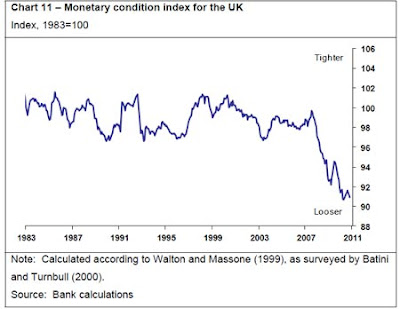 There is economic logic to both sides in this interest rate debate. To complicate matters, data from the economy is giving mixed signals. The recent fall in GDP in Q4 2010, was reassessed to be even deeper at -0.6%. Yet, other signals such as expectations of producer prices give a different perspective.

You really can choose the data to give a certain impression.

Because interest rates are so low, increasing interest rates may have less impact than expected. (see: will higher interest rates have much effect?)
The only thing for the Bank to do, is to take it on a month by month basis and weigh up which is stronger case.

If anything, given recent improvement in public finances, I'd like the government to scale back its spending cuts or delay for another year. This would help the MPC as there would be less need for a very loose monetary policy to compensate for the highly deflationary fiscal policy the government are implementing.
Posted by Tejvan Pettinger at 8:57 AM