Which Inflation Measure Should we Use?

If that list of inflation measures confuses you, don't worry - there's probably many more measures too. But, it does illustrate how calculating inflation is much an art as a science. Depending on how you measure inflation, you can get quite different statistics. But, given the importance we attach to the inflation rate, it becomes very important which one we actually use to decide policy.

The official method of calculating inflation is the CPI. This involves taking a typical basket of goods most commonly bought by consumers. This is a relatively good guide to the cost of living.

However, CPI can give a misleading impression to certain aspects of the economy.

Firstly, some components of CPI (food and energy prices) tend to be volatile. They can change due to weather and unexpected factors. High food inflation can make headline news. However, these volatile factors can give a misleading indicator of spare capacity and underlying growth in the economy.

Usually, a rise in inflation suggests the economy is growing quickly and firms are getting close to full capacity. In this case, it is necessary to tighten monetary policy to prevent a boom and prevent demand pull inflation. However, if inflation increases due to a boom in the oil price or a bad wheat harvest, this doesn't necessarily reflect a booming economy. We are learning this year that you can have inflation and a stagnant economy. In 2008, CPI inflation rose to 5%, but a couple of months later we were in deep recession.

Core inflation, seeks to strip away these temporary factors. It includes less, but gives a better guide to inflation caused by excess demand. As you might expect, core inflation in the UK is less than the headline rate. This graph is from the US.

Another issue is the impact of indirect taxes. Increases in airport tax, VAT, excise duty all lead to an increase in the price level and higher inflation. But, this is a one off factor, it is not an indicator of a booming economy. This is important at the moment, as recent tax increases are increasing the headline inflation rate.

CPIY and CPI -CT basically strip away the impact of tax rises.

When setting interest rates, it is arguably much more important to look at core inflation, excluding the temporary effect of tax. This helps monetary policy to deal with the rate of economic growth and spare capacity.

Clearly, this is very important at the present moment. If we only consider CPI, we will wonder why the Bank of England haven't been increasing interest rates. If we consider other measures of inflation, their policy of resisting monetary tightening makes more sense.

When to Use the CPI?

When setting wages and pensions, it is better to use CPI than core inflation. If pensions were index linked to core inflation, it would mean that pensioners could get an increase less than the actual cost of goods and services they buy. (it could work the other way, core inflation can be higher than CPI)

There is even an argument for creating a CPI index adjusted for pensioners. For example, pensioners may spend a higher % of income on energy and heating. In this case, the pensioner CPI index could take account of this different weighting. 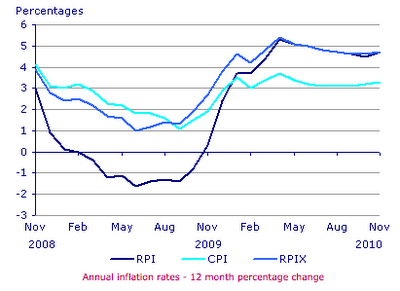 The official inflation rate used to be RPI. The main difference between RPI and CPI is that RPI includes mortgage interest payments. Therefore fall in interest rates led to a lower inflation rate. This graph shows that in 2008, RPI was negative during the period of interest rate cuts, CPI is less volatile.

Posted by Tejvan Pettinger at 8:04 AM