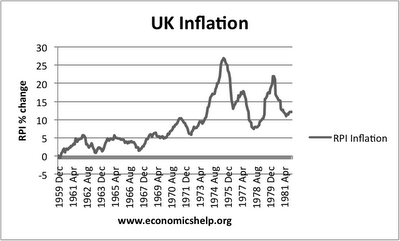 Recently there have been quite a few newspaper articles talking about the 'horrific' inflation of 3.7%. Actually, if you look at Core inflation, CPIY (inflation - taxes) it's not quite as horrific as 3.7%.

Like the 1970s, we are experiencing a worse trade off. We do have higher inflation and prospects of a slowdown in growth.

If the Bank of England really wanted to target CPI inflation of 2%, they could do. But, if they raised interest rates to reduce inflation, it would mean a trade off of lower economic growth.

However, even without interest rate increases, it is forecast that economic growth could slump to as little as 0.1% per quarter; with this growth rate, spare capacity and unemployment will continue to rise. It doesn't make sense to inflict more economic pain with such feeble growth forecasts.

Graph showing combination of high inflation and falling output.
It should also be remembered the inflation target of 2% is not the ultimate goal of economic policy. Savers may say it is not fair inflation is above base interest rates, leading to a decline in real savings. However, would it be fair to increase interest rates rapidly causing a second recession and keep three million out of unemployment?

Unfortunately, there is a situation where something has to give. We can't have both low inflation and full employment. We need to accept this and make a sensible choice between the different choices.

Posted by Tejvan Pettinger at 7:47 AM