Are Things Getting Worse?

Recently, I bought an iPhone. I always resist technology for a few years, then get one and wonder why I didn't buy it two years ago. I couldn't believe how good the iPhone is. It does so many things that those writing Star Trek in the 1960s could never have imagined. Yet, despite these huge advances in technology, there seems to be a sense of dissatisfaction.

If you start a chat about the state of the economy, you invariably hear people complaining about the usual suspects: prices rising, debt, broke government , unemployment e.t.c. It would be tempting to put this all down to economic crisis and austerity measures of the government. But, even in so called good years, you hear similar complaints.

If you look at real incomes over the past 50, 100 years, statistics suggest that we've never had it so good.

Now if I was a cabinet minister I would have to resign for suggesting 'we've never had it so good'. But, if you ignore cyclical factors and look at decade by decade, living standards are immeasurably higher than 50 or 100 years ago. In 1948, Real GDP per Capita was £304,000 Bn (adjusted for inflation). Today it is £1,300,000 bn

Yes, we still have poverty, but the classification of poverty has changed dramatically. When Joseph Rowntree did his ground breaking study of York - Poverty - A study in Town Life in 1901, poverty was defined as not having enough money to buy sufficient food to meet a recommended minimum calorie intake. These day, you can be relatively poor, but have TV, good housing and unimaginable luxuries compared to the slums of York in 1890s.

One reason is that poverty is essentially a relative concept. If we see great affluence around us, we feel poor even if we have quite a reasonable income. Someone in the slums of York in the nineteenth century might have felt very well off if he gained a promotion which gave an extra sixpence wage per week. We tend to measure our sense of welfare by comparing our income to others. If useless bankers can award themselves six figure bonuses, we feel poor on a £20,000 salary.

Also, our feeling of living standards are not just monetary but self-respect. Several million Britons live on welfare benefits, either unemployment or sickness benefits. The actual income of welfare benefits is very high by nineteenth century standards. But, unemployment represents an economic failure, there is no satisfaction from being economically idle. It is a big step down compared to the income of work. If a nineteenth century labourer was given a 2010 unemployment benefit, he would feel remarkably wealthy. But, if you lose a good job, and survive on benefits it is a big step down. 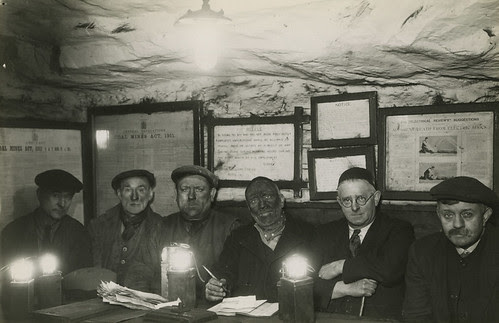 This is not to say, we should just count ourselves lucky we aren't living in a Victorian slum. It is just an observation. If anything it is an observation that the best way to increase economic welfare would be through increasing the perceived level of equality in society. But, also, when things do look grim, I guess it could be a whole lot worse. If you really don't believe that things have got a little better, try reading George Orwell's essay on life as a Coal miner

"It is a dreadful job that they do, an almost superhuman job by the standard of an ordinary person. For they are not only shifting monstrous quantities of coal, they are also doing, it in a position that doubles or trebles the work. They have got to remain kneeling all the while--they could hardly rise from their knees without hitting the ceiling--and you can easily see by trying it what a tremendous effort this means."

And as my Dad would say - those miners with a job were the lucky ones! they had at least a roof over their head! (Four Yorkshireman's Sketch at God's own County)

Posted by Tejvan Pettinger at 8:21 AM