You can have a lot of fun with graphs. 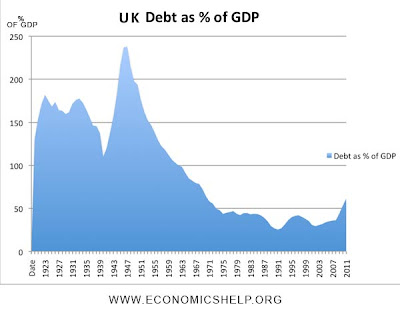 Also of note the 1940s and 1950s weren't a time of spending cuts, rising interest rates and bond crisis. But, a time when we started the NHS and welfare state. Economic growth was strong in this period. There are difference between then and now, but, even so it is interesting. (Will write about these differences soon)

What is the Cost of servicing UK public sector debt?

This is the interest that the government has to pay on the bonds and gilts it sells. e.g.gilt yields may average 3-4%. In the first six months of the year the UK paid £21bn, which means we are set for an annual interest bill of £43bn or 3-4% of GDP.

Again the interest bill is currently much lower than it has been in the past. 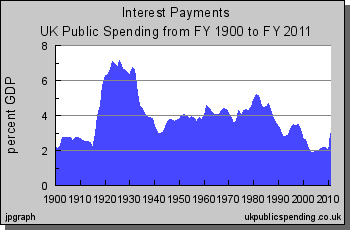 For example, Standard & Poor calculate an increase of three percentage points in the rates paid by the Treasury - so a rise from a little over to 4% today on a 10-year gilt to 7% - would add £35bn to annual debt interest bill. (though there is not a strong historical correlation between higher debt and higher interest rates on bonds.)

However, from a different perspective, it does look worse

Public Sector Debt as % of GDP 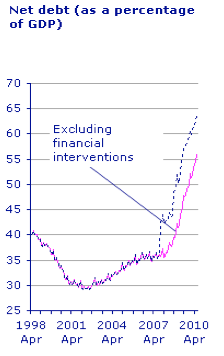 This shows the rapid deterioration in public sector finances. The annual budget deficit is close to 12.5% of GDP - the largest peace time deficit in history.

Posted by Tejvan Pettinger at 8:23 AM