Population growth is an emotive subject. I'm yet to come across anyone who says the UK could do with a just few more people. Generally, we like more space, less people and more of this 'green and pleasant land' to ourselves. Population growth seems to conjures up images of longer traffic jams, cramped schools, unemployment, more use of resources, higher house prices e.t.c. 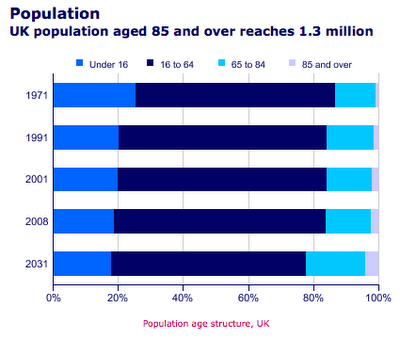 Furthermore, UK population growth is being combined with an ageing population. The number of people aged over 65 is set to nearly double between 1971 and 2030. From one perspective, this implies, higher taxes, budget deficits and spending cuts. (Demographic Time Bomb)

But, population growth is not all bad. The UK's population growth, helped by net migration means that the dependency ratio is growing at a much slower rate than EU counterparts such as Italy and Germany who have a falling birth rate. Population growth means an increase in labour force, and productivity. It gives more scope for tax revenue without increasing tax rates.

Here's an example of statistics which give different perspective. Firstly, the human population has mushroomed in past few centuries. We have long ago dismissed the 'dismal prophecies of Malthus' who as early as the nineteenth century was predicting the growing population would soon run out of food and starve. But, the increased global population will place a greater strain on the world's supply of commodities and threaten the fragile eco-system. These effects are hard to quantify and it may be the growth in population proves much less sustainable than we would like to believe. But, then hopefully earth may prove more adaptable than we fear. Given the stakes involved, hoping may not be enough.

Posted by Tejvan Pettinger at 9:53 AM

Re the age distribution graph; you say "From one perspective, this implies, higher taxes, budget deficits and spending cuts". However, if people are remaining healthier longer and retirement age is extended, surely the picture changes. Suppose a typical retirement age is, say, 68 by 2031. It would be interesting to re-draw the "Distribution of Age Population" graph with the 2031 "16 to 64" range redefined to 16 to 68. I suspect it would look much the same as now. Then we don't need population growth to increase the labour force and tax revenue.

You say: "There is no reason why a large population cannot be conscious of global and environmental issues."

Perhaps, but how big is a large population?

We seem to be economically happiest at a growth rate of 2%; so when the individuals’ ability to consume is saturated, population must grow at 2%, giving a doubling period of 35 years. In your country, which I believe has a population of about 70 million, maintaining that growth rate means 140 million in 2045, 280 million in 2080, 560 million in 2115, and so on; are you okay with that?

Will population growth fall as you show? (And for anyone who misses the subtlety, that’s population GROWTH falling, not population; population will continue to rise.) Or will the economics driven government do everything it can to maintain that magic 2% growth, including maintaining population growth by whatever means it can? Here in Australia, the government is in so much fear of falling growth, that they are paying people to have babies!