The IMF have published a detailed look at government borrowing figures, which has become one of the hottest topics in economics at the moment. (17mb pdf from IMF)

There are serious concerns that governments are exceeding their ability to repay debts.

The problem with government debt is that is immensely complicated. For example, why do markets take fright at Spanish debt (59% of GDP) but leave Japan at (195% of GDP) well alone? (list national debt by country) 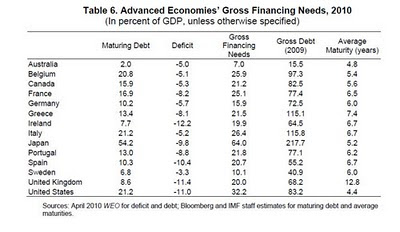