The prospect of deflation is particularly dangerous given the levels of personal debt in the UK. Deflation increases the real value of debt and could be a powerful disincentive to spend, hindering any recovery. More on inflation vs Deflation

The fall in GDP, low inflation and rise in unemployment all point to spare capacity and a large output gap.

Some commentators are already talking about tightening monetary and fiscal policy. But, given current data, such a move could prove premature and push the economy back into recession. 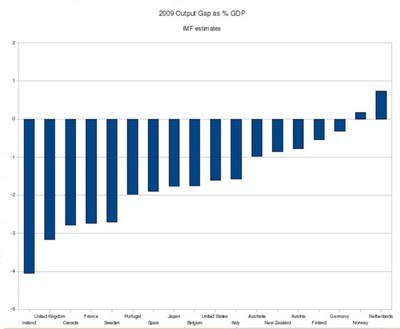 According to IMF estimates for 2009, the UK output gap is one of the largest in the OECD at over 3% of GDP.

Paul Krugman does a back of the envelope calculation to show according to the Rudebusch version of the Taylor rule:
The ideal interest rates would currently be -5.6% in the US. - An indication of the depth of the recession.
Posted by Tejvan Pettinger at 9:23 AM