Are we taking Money From Future Generations?

A frequent argument heard at the moment is that idea that the current levels of borrowing mean that we are taking money from future generations. A 15 year old girl recently gained headline for calling on Gordon Brown to apologise for a lost generation (link) 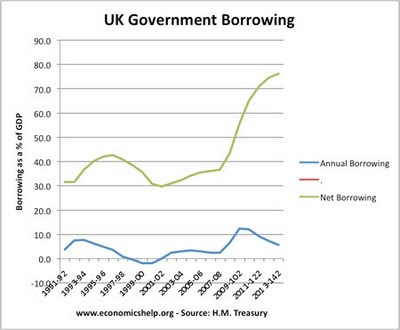 Government borrowing has increased dramatically in the past few years. From just under 30% of GDP to just under 60% of GDP in under 3 years is the sharpest peacetime increase in public sector debt burden.

If government debt as a % of GDP rises, then assuming constant interest rates the debt repayments will rise. Public sector debt is forecast to rise from 30% in 2007 to 80% by 2013. This is a very sharp rise in public sector borrowing. This means current and future taxpayers will have to pay more in interest payments over the next few years. In 2008, debt interest payments account for £31billion (2% of GDP). Debt interest in 2013/14 will exceed £51 billion. But, this figure could be higher if borrowing keeps increasing. To put it in perspective £40bn is equal to roughly 25% of all income tax revenue. £40bn is worth 8p on the basic rate of income tax.

Furthermore, if markets become worried over extent of government debt, and the UK's credit rating is reduced, the interest rate and cost of servicing debt is likely to rise even further as a result.

Also, it is important to bear in mind. 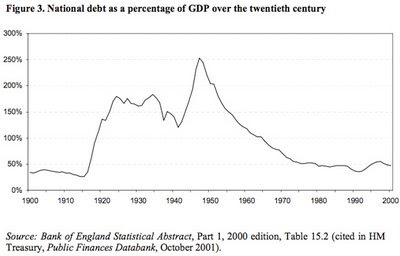 Not all the debt, is due to counter cycling factors. There is also the underlying structural deficit related to the increased spending on health, education, social security and pensions. To borrow to pay for current pensions, is effectively to transfer payments from this economic period to future ones.

However, this generation is not unique in running a budget deficit. Historically, we have experienced much worse. This doesn't mean large budget deficits are good. In the medium term, the government needs to tackle the underlying budget deficit. But, the idea of a generation lost because of today's debt, would be a great exaggeration. Just think in 1945, public sector debt was 145%, what did the government do? Savage public spending cuts? No it introduced the national health care service and welfare state. It left office in 1950, with government borrowing over 180% of GDP. Yet, the 50s and 60s witnessed a golden age of economic expansion and rising living standards. So much for the idea of a lost generation....
Posted by Tejvan Pettinger at 9:12 AM

Can we use future generations' money now? No. Their monies still do not exist. When a person X borrows an amont A but dies before repayment of the loAN, the lender has recourse to his property to get repaid if the value of the property is adequate to meet such obligation. If it is not the case, the loan will remain unpaid to the lender or his heirs, unless of course, the heir of the deceased borrower voluntarily decides to pay up the loan of the ancestor.

Debt is always financed by savings of the current generation and the repayment comes from future cashflows of the borrower. So, the current generation bequeaths both the rights to get repaid on loan and the obligations to repay on the subsequent generations. So, the future generation gets both the right to get repaid on the loan asset inheritted and the loan repayment obligations inherited.
If the debt raised is ude for consumption and no future cash flow yielding is created, the loan can only be repaid by curtailing future consumption by a section of the next generation to another section (the inheriotors of the current genration borrower).
So, current genration cannot use up monies of the future generations.
When we consider public debt, the same would be the conclusion, except that in the case of the Government, it becomes a spongy scheme. Govt.s can borrow as much of the savings of the current and future generations: so on a net basis public debt can go on increasing limitlessly.
Whether results of such growing publoc debt is desirable or not, is a separate issue.
But when the govt. borrows from another country, it commits to repaing the debt with the exports of its future generation. It is really a case of using up the potential income of future g: the latter would have to save more and expoprt more to repay to the future genrations of the other countries.
If public debt has grown to finance funding of stimulus packages to ensure quick economic recovery, that is only going to help the future geneartions to get employment.
But why do govt.s need to take private savings away for waste: they can raise higher taxes and need not borrow. The govts can build up savings in good times so that the savings can b used in bad times.

Great post. It's about time somebody got off the "blame labour for everything" bandwagon and looked at everything relatively. Does that 15 year old girl really think the tories would have acted differently?