Why Have House Prices Stopped Falling?

We have witnessed the worst contraction in bank lending for many decades. Mortgage lending has slumped as banks have retreated into their shells, trying to recoup their bad losses. The recession is also one of the most severe since the 1930s, with output falling by a record level in early 2009. Yet, despite the economic slump, house prices appear to be stabilising with the unexpected prospect of finishing the year higher than they started. 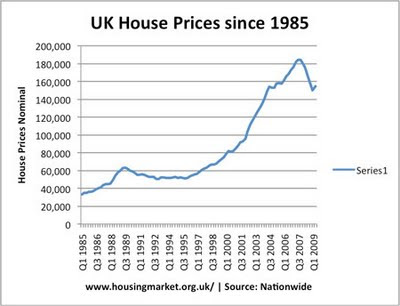 True house prices have fallen 25% since their peak. But, they could hardly be described as cheap. Looking at First time buyer affordability. They are much higher than in the post 1992 slump. 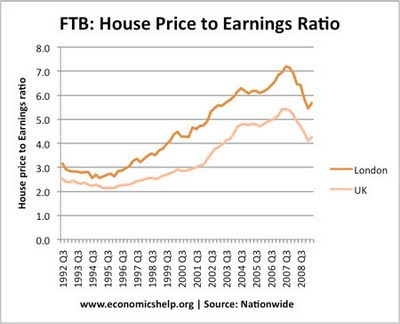 The house price to earnings ratio for first time buyers is still over 4.0 Compared to 2.2 in 1994.

Looking at Mortgage Payments there is a similar story 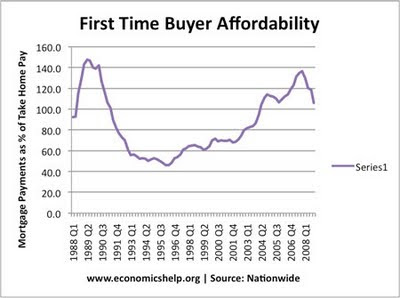 Also the fall in real house prices is less than in the post 1989 boom. With inflation close to 0%, the real fall is similar to the nominal fall. Unlike in the early 1990s when inflation meant the real fall in prices was higher. 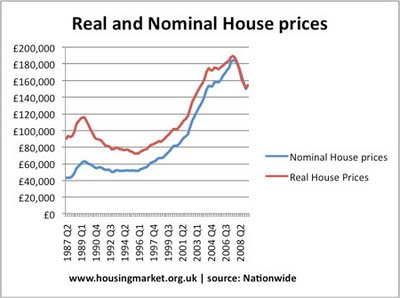 With base rates at 0.5%, many homeowners are reaping an unexpected bonus of cheap mortgage payments. It is a complete contrast to the last boom when interest rates were in double figures. Admittedly, many banks have not passed the whole base rate onto consumers, and fixed rate mortgages are much higher than base rates; but, by historical standards mortgage payments are low.

The volume of housing transactions is very low. Mortgage lending is well below its 2007 peak. Demand is thin, but, so is supply. It is the fundamental shortage of supply, which is keeping prices artificially high.

The housing slump has led to a record low of house builds; it will take several years for the housing stock to increase. Therefore, in the next couple of years house prices are likely to determined by this continuing shortage of new houses for sale.

In countries like the US and Spain there is a surplus of housing stock and this explains why there house price fall is much greater.

The stability in prices will encourage more mortgage lending. With house prices falling, banks require much bigger deposits. But, with stability in prices, we are likely to see a decline in the necessary deposit. This could help first time buyers struggling to get a mortgage

However, maybe it is too early to call an end to the house price slump. Demand for houses is still thin. Unemployment is continuing to rise and banks are still reluctant to lend. The ratio of house price to earnings will give little comfort to those hoping to buy their first house. Looking at the last housing slump, prices remained in the doldrums for nearly 4 years. Nevertheless, it is still interesting to see Halifax 3 month measure showing a positive rise for first time since 2007.

Posted by Tejvan Pettinger at 9:10 AM