A few weeks ago, I read an interesting piece in the Economist from Christina Romer, the chairwoman of Barack Obama's Council of Economic Advisers (lessons from 1937)

Basically, it concentrated on the events of 1937 and the double dip recession which occurred. 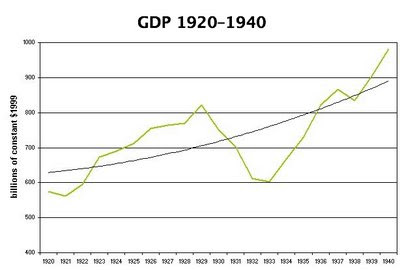 Most people assume that the Great Depression lasted for the whole 1930s, but, this wasn't the case. Output fell for 3-4 years between 1929-32, but then recovered. By 1936, output was rising strongly. Unemployment was still high, but, it had started to fall.

However, 1937, was a real kick in the teeth as the relatively strong recovery came to an end and the economy went into recession again, causing unemployment to rise above 20%.


This does not mean we should permanently run in a budget deficit because of fear of creating a double dip recession. The governments deficit will not be reduced by a return to normal rates of growth. In the medium to long term, the government will need to tackle the structural deficit.

However, they will need to be careful. There will also need to be a careful co-ordination with monetary policy to prevent a sudden tightening which could push the economy back into recession.