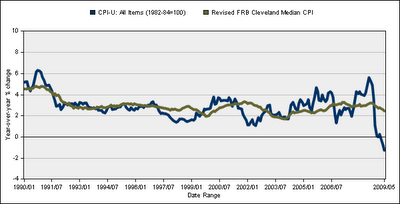 This graph shows the headline inflation rate (in US) and the median inflation rate. The Median CPI excludes those items which show the biggest variation either way. This median rate gives a less volatile inflation rate figure. Although this graph is for the US, it would be a similar story for the UK

The inflation rate plays a key role in influencing decisions on Monetary and Fiscal Policy.

For example, in early 2008, a spike in oil prices caused a rise in inflation. This rise in inflation encouraged Central Banks to keep interest rates high - just as we were entering a recession. In retrospect this was a mistake.

Now, we are faced with prospect of deflation; but, if underlying inflation trends are closer to 2%, then the case for quantitative easing is less strong.

Also, as we argued here, it is a mistake to give too much importance to inflation in the development of Monetary and Fiscal policy. - Is inflation really so bad?

Graph via: G.Mankiw
Posted by Tejvan Pettinger at 8:57 AM