During a recession, consumers become risk averse; rather than take out loans they seek to pay back loans. For example, this year, more mortgage debt has been paid back than taken out. This fall in private sector borrowing (and corresponding rise in private sector saving) can be very sharp causing a potentially dramatic fall in aggregate demand and economic output. If the government maintained the same fiscal position, there would be a sharp fall in output.

This graph shows the inverse relationship between private borrowing and government borrowing in the US. 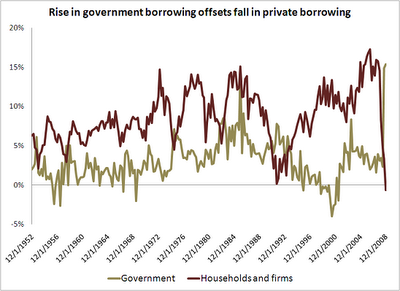 Also the fact that private saving rises means there is greater appetite for buying government debt and therefore 'crowding out' and higher interest rates are unlikely to occur.

The difficulties will come in 2010, 2011 if the economy recovers and the government is unable to reduce its borrowing. To increase government borrowing is politically much easier than to reduce borrowing. But reducing borrowing (when circumstances dictate) is just as important as the borrowing.

Posted by Tejvan Pettinger at 9:31 AM