Between 1999 and October 2008, UK interest rates were remarkably steady. They varied from a peak of 6.0% in 2000 to a temporary low of 3.5% at the end of October 2008 - just before they were dramatically slashed. This represents an era of great stability and coincidences with a period of low inflation and steady growth. Monetary Policy looked pretty unexciting, and rates rarely varied by more than 0.25%. This apparent stability in interest rate policy of cause masked volatility in credit and housing markets.

Graph of UK Interest Rates since 1990 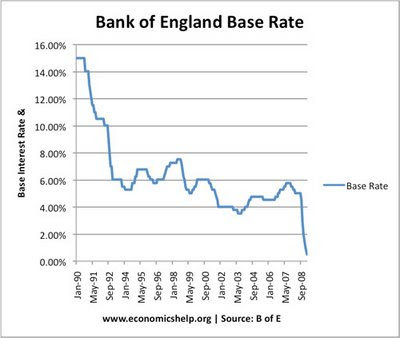 The outlook for future UK interest rates becomes much more difficult to predict. This is because:
You could paint two scenarios

Quick Rise in interest rates to 5 - 6%
On the Other Hand You could argue:

Interest Rates Forecast to Remain at 0%
OK, time to stop sitting on the fence. - What do I think?

Well, somewhere in between. But I believe we will have slow economic recovery which will create some inflationary pressure. But, I do think interest rates will rise to 3 or 4%. I think we will avoid the Japanese experience of zero rates. But, we live in uncertain times and there is an element of wait and see and then revise your forecasts.
Posted by Tejvan Pettinger at 11:12 AM

My opinion:
-banks are not lending enough yet - house prices will keep on falling
-a lot of reposession to come
- a lot of unemployment to come -deflation to come before inflation (current little spike of inflation is ridiculous and tottally due to oil at 70$ and nothing else)
- still need for weak pound
- sell of gilts god knows what's gonna happen
-one more year with a lame gov

thus rates low for a while.