Whilst it is still far too early to pat ourselves on the back and look forward to a prolonged economic recovery, the fears of a 'Great Depression mark II' at least seem to have been averted.

Firstly, there were strong parallels between the situation of 2007/08 and 1929. (Causes of Great Depression)
In the great depression. Output fell by over 30% and unemployment rose to 20%. So far output has fallen by about 4%. This makes it a severe recession, by modern standards - but also a long way from the scale of the great depression.

Recessions and the Great Depression 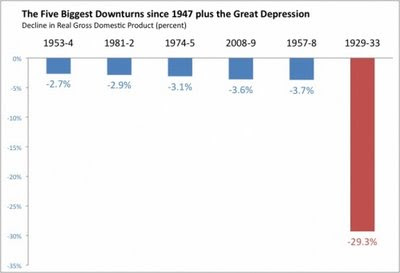 Of course, worse may yet come. But, what are the reasons for averting a more serious recession.

Bank Failure. This is the primary reason for the recession of 1930 turning into a major depression. It was the failure of banks which caused a 30% fall in the money supply, deflation and a loss of consumer confidence. With a few exceptions, governments have pledged to support banks. It may be expensive for tax payer.

Fiscal Deficits. Whilst we are rightly worrying about the size of government borrowing. The fiscal deficits have played a role in stabilising the downturn. If we had pursued the old orthodox model of trying to turn a £175bn deficit into a zero deficit, the fall in consumer spending and investment would have been much steeper.

Quantitative easing. Increasing money supply has reduced risk and magnitude of deflation - a powerful cause of falling output.

In some ways we learnt nothing in allowing a credit bubble and bust. But, in dealing with recessions, we have learnt something from the dark days of the 1930s.

Posted by Tejvan Pettinger at 9:52 AM