The Twin Threat of Inflation and Deflation

Give Me a One Armed Economist - seems to be the theme of the week. This week, we have two economists highlighting opposite dangers - inflation and deflation.
The interesting thing is both bring strong economic analysis to their differing opinions.

Paul Krugman points to the large spare capacity, debt deleveraging and falling nominal wages as powerful causes of deflation. He also makes the point that deflation and falling wages will be very harmful for a struggling economy. A cut in nominal wages is akin to rising interest rates on mortgage payments.

Alan Meltzer looks to other features of the economy. He sees
In reposte to this, Paul Krugman points out the experience of Japan who had high debt, growth in money supply, quantitative easing but no inflation 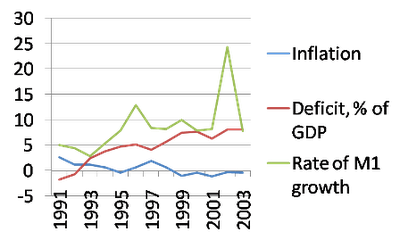 source:
So which risk is greater?

I still feel it is the threat of deflation that poses the gravest risk to the economy. The scale of monetary and fiscal stimulus means it may be hard to overshoot the inflation target. But, overshooting an inflation target will be much less painful than a decade of economic stagnation.

And this is a lesson the ECB may need to learn pretty quick.(update, ECB yesterday cut rates to 1% and even made tentative moves towards quantitative easing) But, the ECB still lag behind US and UK in dealing with the threat posed by deflation.
Posted by Tejvan Pettinger at 1:44 PM

Its been a while. Just curious about what you think about the thesis here:

The Fed Needs to Make a Policy Statement -- summary:

The Fed’s astoundingly large increase in reserves has many worried about future inflation and wringing their hands over exit strategies. This column argues that the Fed can control inflation by varying the interest rate it pays (or charges) banks on their reserve holding. Consequently, the Fed’s exit strategy need not be constrained by concerns about inflation – reserve interest-rate policy can take care of inflation, but the Fed should publically announce this policy.

Just curious to know what you think and how it impacts the US economy, and the rest of the world at large. Thanks,