It was only last week that we looked at National debt from a historical perspective. As a % of GDP, national debt has been much worse in the past. But, we still face the largest peace time annual budget deficit. The IMF forecast government borrowing of 11% of GDP, others forecast borrowing of upto £180bn. 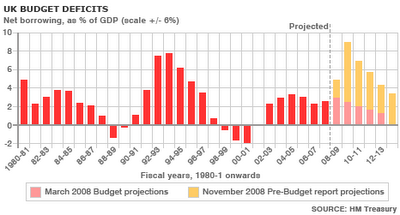 This graph uses November 208 pre-Budget report projections, however, even these are likely to be too optimistic.
It is the sharp deterioration in government finances that have concerned the markets.

Last week, the government faced the embarrassment of a failed gilts auction.

Government debt is financed by selling government bonds (or gilts). The Bank of England used to sell gilts but it is now done by a new body - The UK Debt Management Office (DMO)

The UK Debt Management Office (DMO) attracted just £1.67bn in bids for its sale of £1.75bn of 2049 gilts this morning, its first uncovered auction of conventional gilts since 1995.

The cover of just 0.93 times is one of the lowest on records.

Impact of a Failed Gilts Auction:
The DMO is expected to issue £146.6bn of gilts this year - compared to £58bn last year.

Posted by Tejvan Pettinger at 9:11 AM