Why House Prices Have Fallen 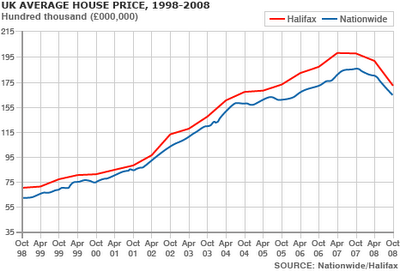 Readers Question: Why have house prices in UK fallen since August 2007.

Since 2007. House prices have fallen significantly. Why?

This is the biggest reason for the decline in house prices. In the boom years, mortgage companies were very keen to lend. Credit was freely available. Banks lent unorthodox mortgages such as 100% mortgages, interest only, self-certification mortgages, mortgages several times income e.t.c. This helped people get on the property ladder (despite rising prices) and this helped house prices increase further. However, due to credit crunch, in 2007 banks found it difficult to raise enough money on money markets. Interbank lending dried up and so companies started to ration credit. Banks simply lost the ability to lend mortgages. People who used to be able to get a mortgage no longer could. Therefore demand dried up - especially from first time buyers. One of the main stumbling blocks was that banks now required big deposits - at least 10% or 25% to get a competitive mortgage rate.

The ratio of house prices to incomes had increased to high levels. (from 3.3 in 2003) to 5.1 in 2007 (see: Ratio of House price to incomes) People had been able to buy mortgages in the boom year, because of the wide range of generous mortgages. However, now mortgages were scarce housing became effectively unaffordable. Most first time buyers struggled to get a deposit for 10-25%.

The recession and rising unemployment has created additional problems for the housing market. Unemployment means people are likely to default on mortgage payments (even with low interest rates) this creates more houses sold on the market. The fear of unemployment also discourages people from buying. The worry is that if defaults increase too much, banks may lose more money and be even more reluctant to lend mortgages.

What Will Happen Next for House prices?

House prices will probably continue to fall in 2009. However, there will come a point when people will return to the housing market. Even this crash won't change British people's like for owning a house rather than renting. And as much as we like to own a house we really hate to build them. The supply of new houses continues to be way below government target leaving potential for future shortages.

Overvalued Housing Markets
Posted by Tejvan Pettinger at 9:03 AM

To house price increase I would add; overpopulation, (this is after all a small island) social breakdown (people living alone in dwellings that are too big for them) and foreign property speculation (particularly Eastern holdings of Sterling being repatriated).

That leads me on to the West just printing money that inflates prices, we have a boom and bust every ten years and during the bust all our printed money comes back in the form of foreigners buying up our businesses, industries, land and homes. In effect we enslave ourselves with our economic madness.

Totally agree, we do hate building houses in this country, and this is the reason the property market will boom again, simple demand and supply. Few houses, many people.

Blame archaic planning laws, council planning officers for thinking their God, and a Government that refuses to listen, even after spending money commissioning the Barker Report.

The result was that all around the world, it became very difficult to raise funds and borrow money. The cost of interbank lending has increased significantly.
tax relief attorney