GDP measures National output using official statistics. However, there are many discrepancies. Suppose you spend £1,000 a year on vegetables. But, then decide to convert your back garden into an allotment growing everything from seed. Your expenditure falls by £1,000 so National Output appears to fall, but you are still consuming the same amount of vegetables. A women may earn £10,000 a year working as a cleaner. When she gets married she continues to do the housework and cleaning, but, she doesn't get paid anything (maybe a little outdated example)

Suppose:
No, firstly, one dollar in Tanzania will go a lot further than in the US. To rent an apartment in New York may cost $500 a month. In Tanzania a similar apartment may cost $20 a month. This is why economists prefer to use Purchasing Power Parity.
Another issue, is that maybe Tanzania underestimate their GDP because many people are subsistent farmers. i.e. they grow their own food and so do not declare an income. This lifestyle is rare in the US. 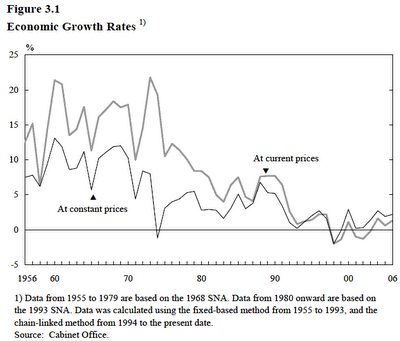 What Happens to GDP between 1973 and 1985?
Here the statistics are not misleading. It is because we are asking a question about something different to what is displayed on the axis. The vertical axis shows GDP growth, but we ask about GDP. This is why there is the potential for being misled if we confuse rates of change with absolute changes.

Suppose we have a household with a man and a wife earning $26,000 a year. Their combined income for the household is $52,000. If they got divorced there would be 2 households with $26,000 it would appear there is a doubling of households who earn less than $30,000

Posted by Tejvan Pettinger at 10:42 AM