In the past 12 months, US house prices have fallen by nearly 15%. This reflects a correction to a period of rapidly rising house prices, fuelled by cheap lending. However, the concern over house prices is not limited to the US. In fact, a study by the IMF suggests that many other countries have house prices that are overvalued relative to earnings, rent prices and other long term house price trends.

According to the IMF, house prices are most overvalued in Ireland (30%), Netherlands and Britain (29%) America by contrast have house prices overvalued by only 10%. Therefore, there is a real possibility of housing slumps in other countries; if these housing slumps occur it could trigger slowdown in global growth, especially in Europe and OECD economies. 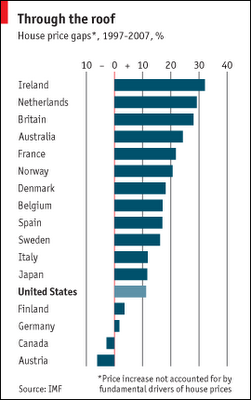 Why House Prices are Overvalued.

Era of Cheap Borrowing. In the past 10 years, lenders have been keen to extend mortgages to consumers who were previously thought to be high risk. Examples, include subprime mortgages and lending upto 5 times incomes. The competitive mortgage industry made mortgages cheaper than usual and encouraged more groups of households to take out mortgages. However, the subprime crisis has dramatically altered the mortgage industry. The number of mortgage products has substantially fallen, making it much more difficult to get a mortgage unless you have a large deposit. (see: credit crisis 2008)

Supply Constraints in Many Countries. The supply of housing is notoriously inelastic in many western economies. There is a shortage of land and a difficulty of gaining planning permits; this means housing supply struggles to meet with growing demand. However, the supply constraints do not explain all the house price increases.

Speculation. The era of rising house prices encouraged people to 'buy to let'. Landlords bought houses to gain income from both rent and capital gains. For example, in the UK, the proportion of mortgages held by landlords has risen from 1% to 10%. It may be that as the market turns this new group of homeowners will be much keener to sell.

Ratio of Earnings to House prices. The ratio of House prices to earnings shows that house prices have increased above long term trends and makes house prices susceptible to a substantial fall to correct the lack of affordability. This is particularly notable amongst first time buyers who are struggling to get on the property ladder.

Graph of House Price to Earning

Is the End Nigh? - Why the Housing Crash may be less Severe Than Feared

Despite the grim prognosis of many analysts, the UK and other European economies may still be able to avoid a slump in housing prices similar to the US. These are some factors which may prevent a housing slump as bad as the US.
Conclusion

The unprecedented rise in house prices do have some fundamental economic reasons behind them. Nevertheless there is also clear evidence that, at least part of the rise, is due to speculative buying, and this creates the potential for significant house price falls as the market turns. The extent of the house price slump may not be as severe as the worst predictions. (I don't think the European markets are precarious as the US, but, there were many who said US house prices would never fall. Also if conditions in the credit markets continue to worsen it will further worsen the prospects for house prices.

Posted by Tejvan Pettinger at 2:02 PM

Will 2012 have an affect on the London's housing values?

I Don't Think it will be significant

How come Netherland is not affected much by the housing bubble. By looking at the graph they should have equal exposure just like Ireland & UK.

I'm not sure about Netherlands. I haven't read much about their economy. But, I'd be surprised if they are not affected in a similar way

Despite almost similar figures for France, prices may be overvalued for a very different reason than for UK. When a house goes for sale, the price is always on the 'up' side because it will almost always be bargained by the potential buyers.

In France there's no 'auction' system like I've seen in UK ('offers starts at x£') or at least very uncommon. The first interested buyer to make an offer accepted by the buyer'locks' the transaction i.e. no other buyer can come after and overbid the price. Buyers will always try to get the price down because mortgages are very difficult to get.

"Overvalued" implies a knowledge of the "correct" value.Can historical data tell us that? To an extent, houses are luxury goods. Most people (UK) use more housing than they need...we could live in smaller houses with smaller gardens but (mostly) we would like bigger of both (we watch USA TV!). It might mean that as incomes rise, house prices will rise more than proportionately*, given space restrictions on new building. Add to that a rising population and perhaps rising affluence in specific groups (e.g. recent immigrants are often young, ambitious and hard working), models based on historical data may be inadequate.